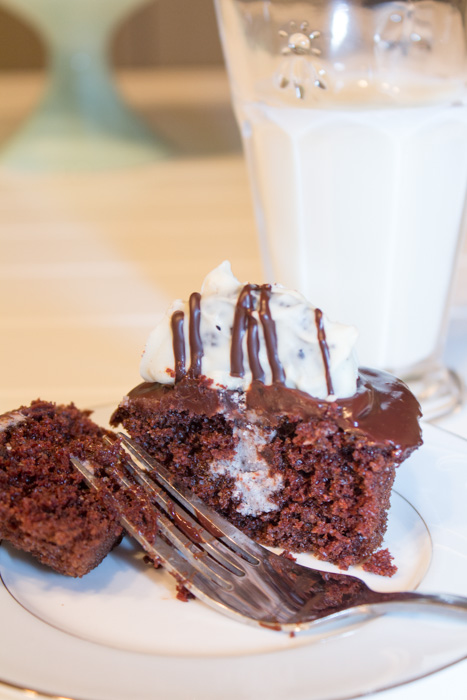 The first buttercream frosting I ever made was an Oreo buttercream. Armed with a mini food processor I chopped the Oreos down to mere crumbs and whipped them into Martha Stewart’s vanilla buttercream recipe. After one taste (and a second and third and fourth) I knew I would never buy store-bought frosting again. Well, unless it’s rainbow chip as I have yet to find a good substitute. 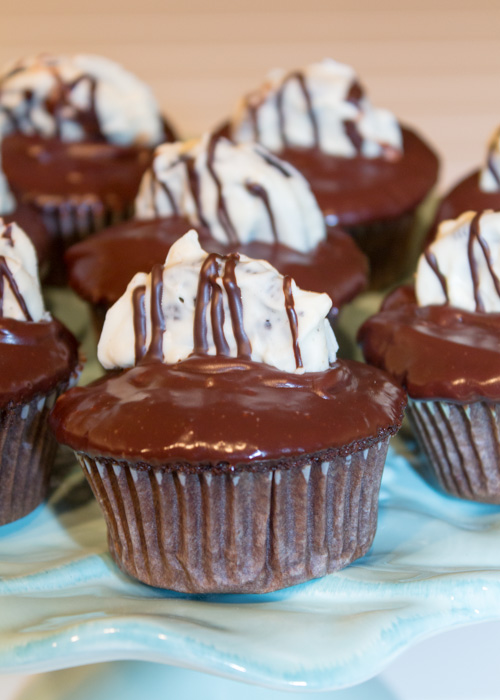 This Oreo buttercream had my head spinning and it wasn’t just the sugar rush. Something this smooth, decadent and bursting with Oreo flavor only takes a matter of mere minutes and a few simple ingredients? That was a dangerous fact to stumble upon. 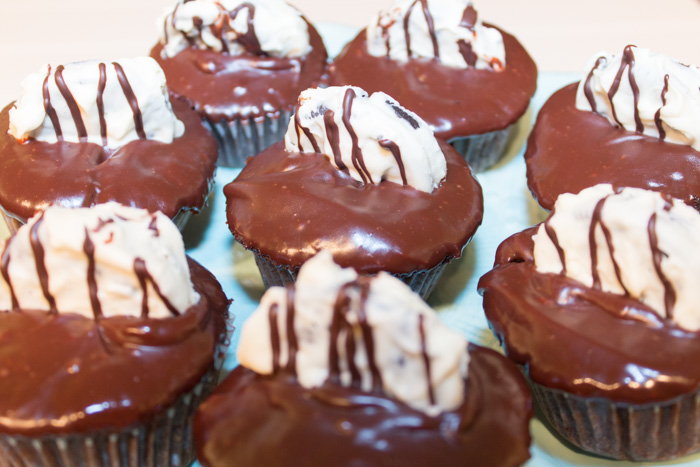 I have since made many buttercreams, whipped frostings, cream cheese frostings and glazes, but I always find myself coming back to that original Oreo buttercream. When I was visiting my family last summer for our annual beach week I wanted to bring them the best of the best. So I decided to combine all my favorites, including these perfect chocolate cupcakes, this amazing chocolate ganache and the above mentioned Oreo buttercream, into an ultimate super cupcake. 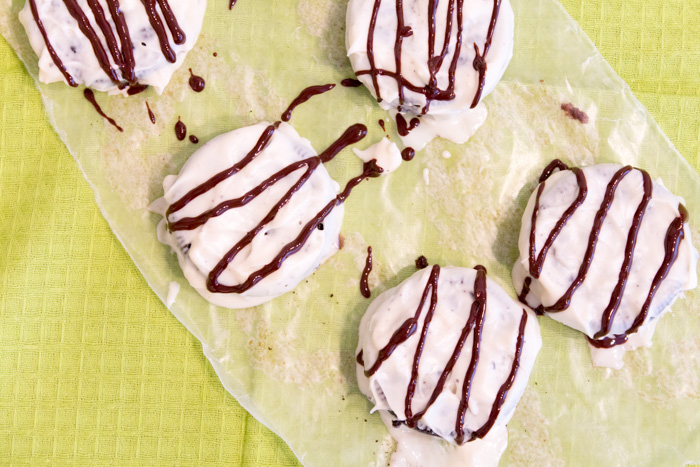 Topped, of course, with a chocolate-covered Oreo, these cupcakes are guaranteed to make your family, friends, coworkers and strangers want to hug you. Or imprison you in their kitchen so you can forever make them these cupcakes, it could really go either way. So enjoy these treats, but proceed with caution. 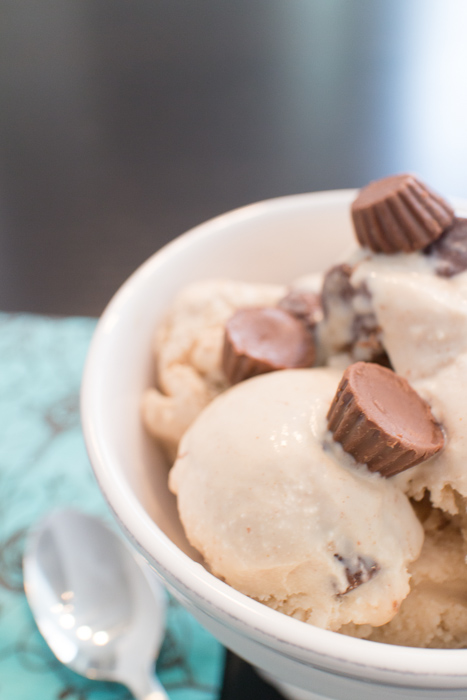 I have loved ice cream as long as I can remember. Whether it was a simple scoop of vanilla at home, a soft-serve cone from the local lunch spot or a bowl of freeze-dried ice cream bits from the Dippin’ Dots fad, I have loved it, craved it and eaten it all. My love for creating ice cream, however, is a much more recent hobby. 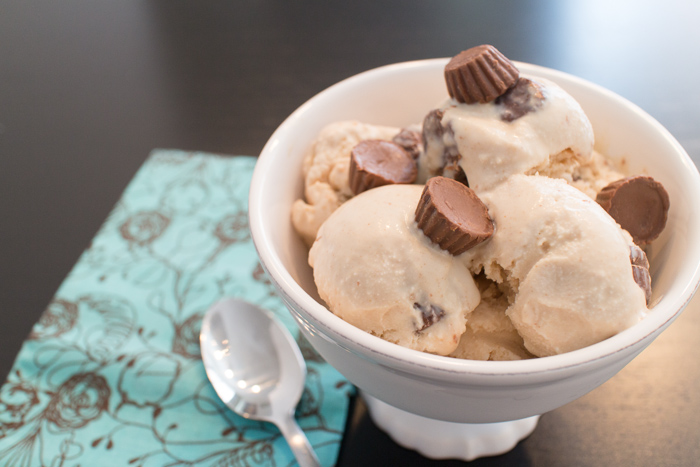 Years ago my stepmom purchased an ice cream maker for the family for Christmas. We made one batch of super rich chocolate ice cream Christmas morning and then that was the end of it. So this past summer I pulled it out of my parents’ basement, brought it to my apartment, dusted it off and got to work. 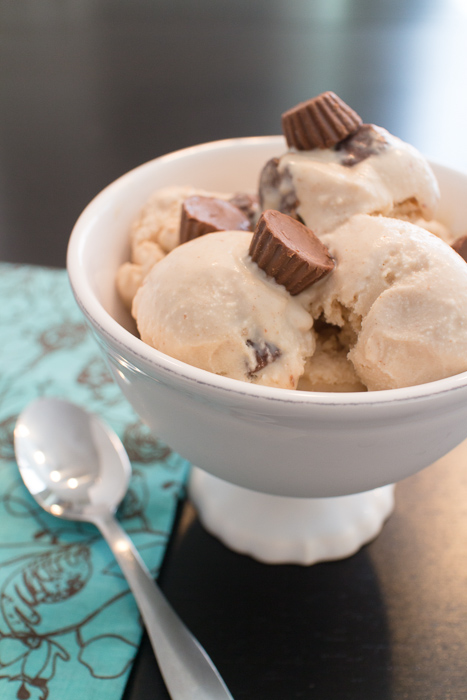 If you have been intimidated at the prospect of making homemade ice cream then this peanut butter cup ice cream recipe is a fantastic starting point. It is easy, simple, only requires a few ingredients and the end result is snarfworthy. The peanut butter flavor is strong and bold with the mini peanut butter cups providing a surprise treat in every spoonful. A smooth and creamy texture will leave you wanting just one more bite, especially since the ice cream isn’t overly rich. You will wonder why you’ve waiting so long to make something tasty and the ice cream maker will become a regular fixture on your countertop. So make this peanut butter cup ice cream and treat yourself to a big scoop… followed by just one more bite. 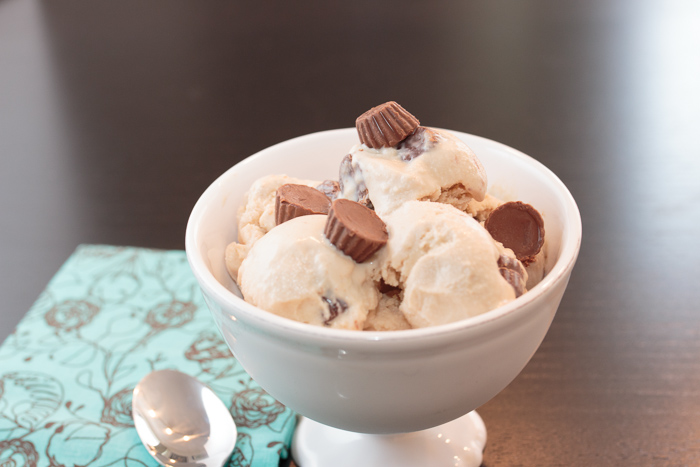 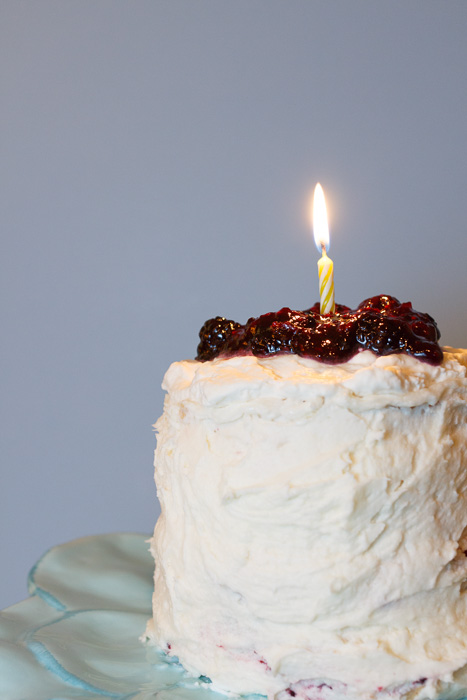 There are a lot of special days throughout the year, but yesterday was extra exciting. No, it wasn’t Ben & Jerry’s free cone day or a work holiday. And there weren’t any overturned bakery trucks spilling pastries into the street or any celebrity sightings. There was a birthday in the Lemon & Mocha family:  yesterday Matt was one year older! What an old geezer! Just kidding, especially since I’m six months his senior. 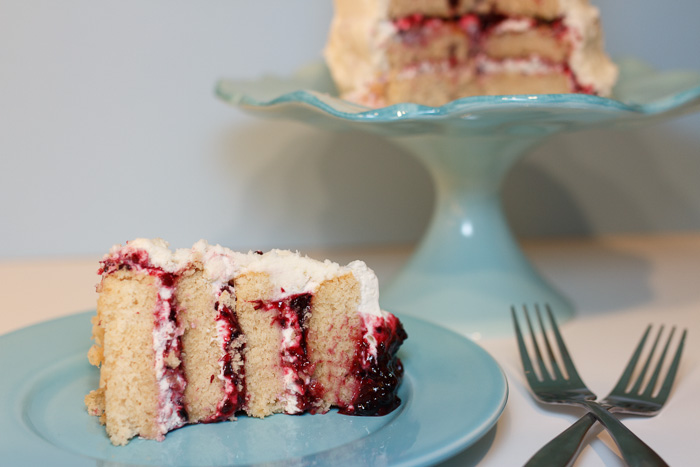 As I’m sure you’ve noticed, Matt is an amazing photographer and an excellent eater. He is also one of the most caring people and without his support and encouragement Lemon & Mocha might still have been a dream of mine rather than a reality. To celebrate Matt’s day of birth I wanted to make him an extra special cake. This was more difficult than it sounds as Matt and I have been heavily cutting back on desserts. I found this fabulous blog called Sweetapolita that would ensure the treat would remain a treat and not a week-long gorge session of a full 9-inch layer cake. I haven’t had great luck with scaled down baked goods, including some incredibly disappointing recipe that made two dense vanilla cupcakes, but this mini cake turned out fabulous. The fruity interior was light and beautiful against the moist vanilla cake. I never have the greatest luck with vanilla cakes, but this one was incredibly tasty. There are a fair amount of components and steps, but I spread it out over a couple days to make it easier to manage. Although the cake is so divine you will want to keep it to yourself, this “cake for two” is more like a cake for four or six so they’ll be plenty for you even if you share. So happy birthday, Matt! As part of my gift I was going to make sure you didn’t have to take any photographs of your own cake, but you couldn’t help yourself 😉 Coffee cake is one of the many foods that reminds me of my grandma. I love the soft cake, sweet ribbons of cinnamon sugar and the icing coated top of my grandma’s coffee cake. When she lived with me she would make them regularly, even storing big slices in the freezer so I could pull them out and microwave them for 30 seconds for an after school snack. Although I’m reminded of my grandma because she was the one to bake the coffee cakes, I’m more reminded of the morning ritual that would occur. As the first two people awake every morning my grandma and I would get to share some alone time. It was different than the alone time we would spend in the car on the way home from field hockey practice and different than the alone time we would spend during our weekly mall trips. The business of the day had not yet begun; the house was quiet and the mood in the kitchen was serene. Now when I go down to visit my grandma we usually get a little alone time, but it’s not that the same as those early kitchen mornings we used to have. The minute I tasted this pomegranate molasses coffee cake loaf I knew my grandma would approve. Baking this coffee cake loaf could not be easier, but even if it required expert skill and extreme brain power I would still implore you to bake it because it is just that amazing. The cake is moist and perfectly spiced. And the crumble, yes please. I love my grandma’s icing, but I must confess that this crumble takes the cake. Literally. I could eat a plate of just the crumble topping. I will have to bring my grandma a loaf the next time I visit, but in the meantime I will enjoy it myself and squirrel away big slices in the freezer for midmorning snacks. 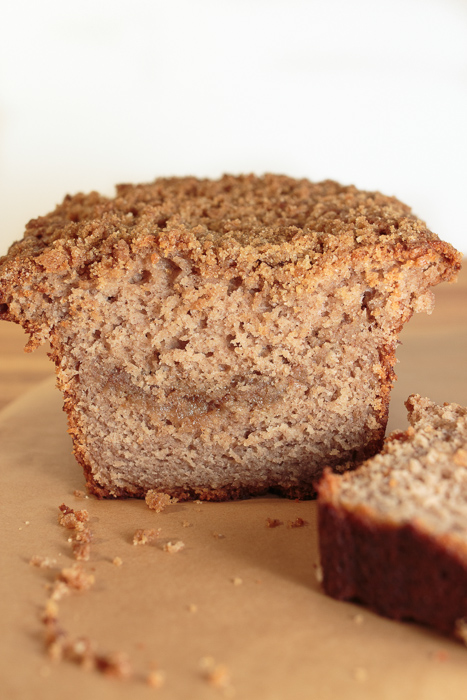 Print
Yield: 1 loaf
Ingredients
for the cake
for the crumble
Directions
Notes
*If you don't have buttermilk put 1 tablespoon of lemon juice in a liquid measuring cup then fill the rest of the way with milk. Let sit for 5 minutes before using in the recipe. Any milk from skim to whole will work.
*Although the cake won't cut as well while it's still warm it's worth to cut a messy slice just to taste this baby while it's warm!
3.2.1263
Recipe from How Sweet It Is. These cupcakes have me in such a frenzy of excitement that I don’t even know where to begin. I suppose the best place to start is how these cupcakes came into existence. Well, literally I baked them, but before that they were just a vision of my tasty, chocolate-clouded imagination. Last year my friend was having a big milestone birthday and three important factors came into play when determining what to make her for said birthday. One, she is a health fanatic and does not eat desserts. I’m talking no desserts even during our holiday potluck at work; this girl’s got some serious willpower. Two, she loves bacon and regularly orders a bacon, egg and cheese, minus the bread and cheese. Don’t ask. Three, and this is the important one, she informed me that for her birthday she was going to treat herself to some dessert. The minute that sentence left her mouth I knew I was tasked with creating the most amazing, decadent, oh-my-Paula-Deen, diet breaking worthy dessert of all time. Each component is more sin-inducing than the previous and you will wonder how you managed to exist up until this point without experiencing such a life altering  perfect morsel. The base is a chocolate cake recipe that we know and love, fondly referred to as the perfect chocolate cupcake for its incomparable moist texture and rich chocolate taste. They are then stuffed with a whiskey cream filling. A little bit naughty and a whole lot delicious. The maple glaze on top is light enough that it doesn’t add too much richness to the already decadent cupcakes, but the maple flavor still comes through to compliment the bacon. Oh the bacon. The ultimate dessert garnish is no garnish at all, but the singular component that unifies the entire cupcake. Pan-fried as all proper bacon should be so that it’s allowed to cook in it’s own grease and soak up as much bacony flavor as possible. Then half dipped in chocolate to create a salty-sweet duo that will bring you to your knees, where you will stay while you finish your cupcake because you’re shaking so much from excitement that you can’t be trusted at a full upright position. If you’ve been searching for the one dessert that will make you overjoyed that you broke your diet then make these this weekend.