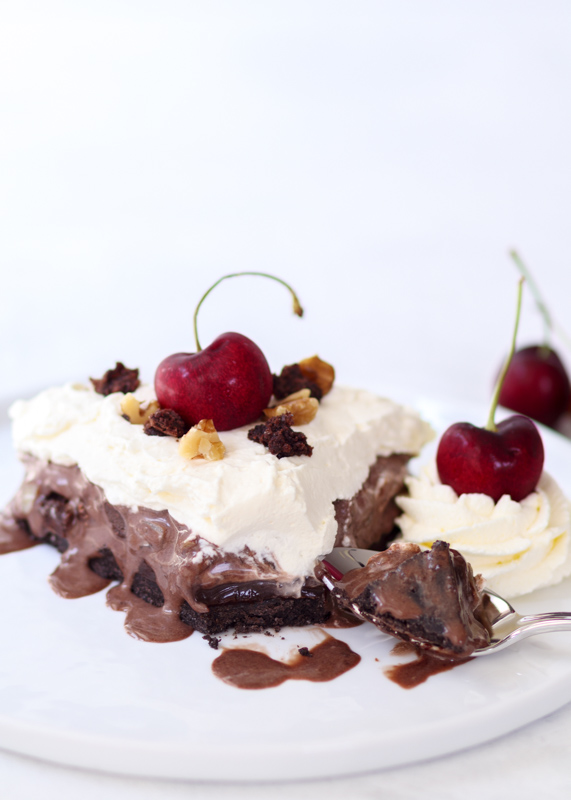 Happy Friday, friends! It is the last day of my self-proclaimed ice cream week and I have an epic grand finale for you. Hot Fudge Brownie Sundae Ice Cream Pie! I’ve turned the classic dessert into an ice cream pie because everyone needs more ice cream pie in their lives. Especially during the summer time. I love making ice cream pies year round though; it is my go-to dessert to make for someone’s birthday or any type of celebration. Usually my ice cream pies have four major components: cookie or graham base, ice cream, some sort of decadent topping and whipped cream. Well, five components if you include the cherries, candy or other goodies that get sprinkled on top. 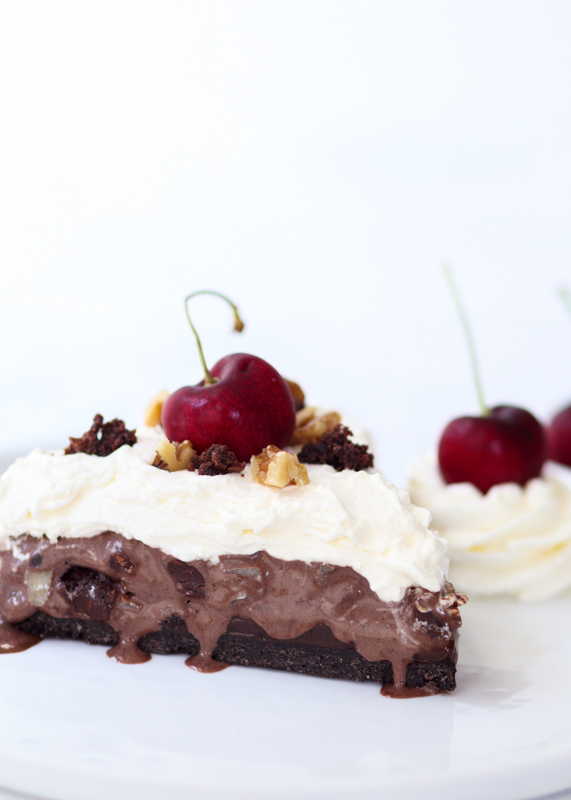 This pie uses Monday’s Chocolate Brownie Walnut Ice Cream in an unbelievable way. Or a criminal way, as my Dad said when he tried it. As in, “that ice cream pie was criminal – it should be outlawed!” Direct quote right there. The first layer of this pie is your standard no-bake Oreo crust. On top of the crust we have a layer of hot fudge, since we are trying to replicate the hot fudge brownie sundae after all. I was making so many other components of this pie that I went with store bought hot fudge, but you could definitely make your own if you have a go-to recipe. I don’t have a hot fudge recipe on Lemon & Mocha, but I’m adding it to my list to test for you all! 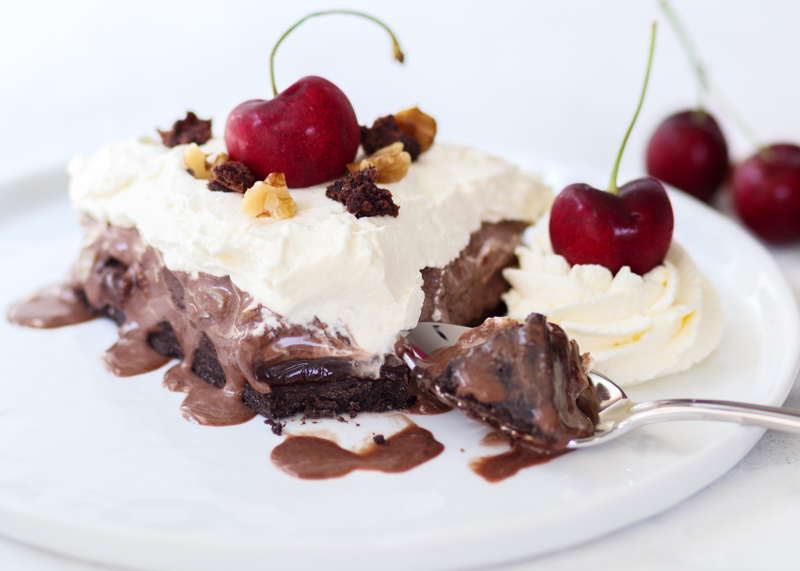 Next we have the Chocolate Brownie Walnut Ice Cream. I debated whether I wanted to have an entire brownie layer or to put the brownie chunks in the ice cream, but I went with the latter. There’s just the right amount of brownie chunks and walnuts that you get some in every bite, adding the perfect fudgy and crunchy texture.

I used a chocolate ice cream base because more chocolate makes everything better, but you could certainly use vanilla ice cream before folding in the brownies and walnuts. Simply follow my Vanilla Bean Ice Cream recipe up until the step where you’re about to put it in the ice cream maker, then follow the Chocolate Brownie Walnut Ice Cream recipe for brownie and walnut mix-in directions. Or, if you’re using the shortcut version I talked about in Monday’s post you would just mix the brownies and walnuts into your favorite store-bought vanilla ice cream. Finally, pile on the quick homemade whipped cream followed by plenty of cherries. 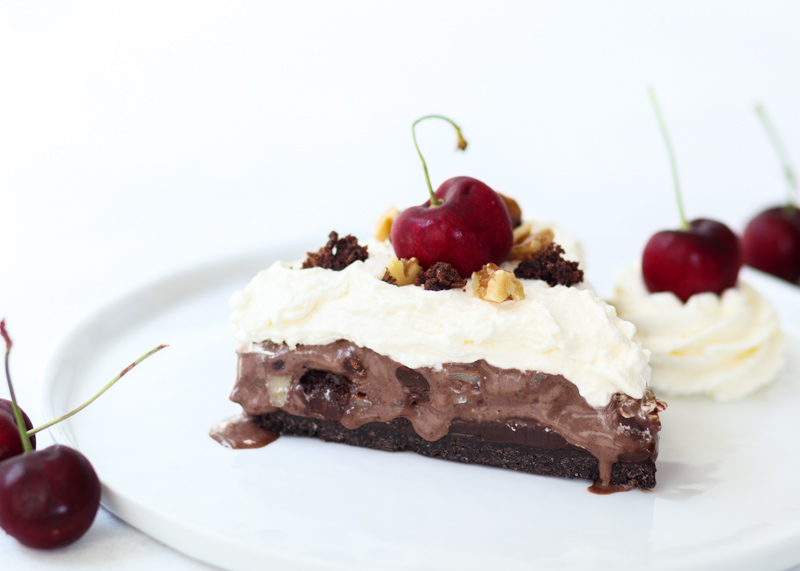 Obviously I love eating ice cream pies because I’m ice cream obsessed, but the reason I love making them is because of the flexibility of the components. Feeling ambitious and like you want to show-off? Go full-on homemade with everything. Short on time? Pick up everything you need at the store. I usually fall somewhere in between. I like to have one or two components I can impress with and then take shortcuts on the rest to save time. 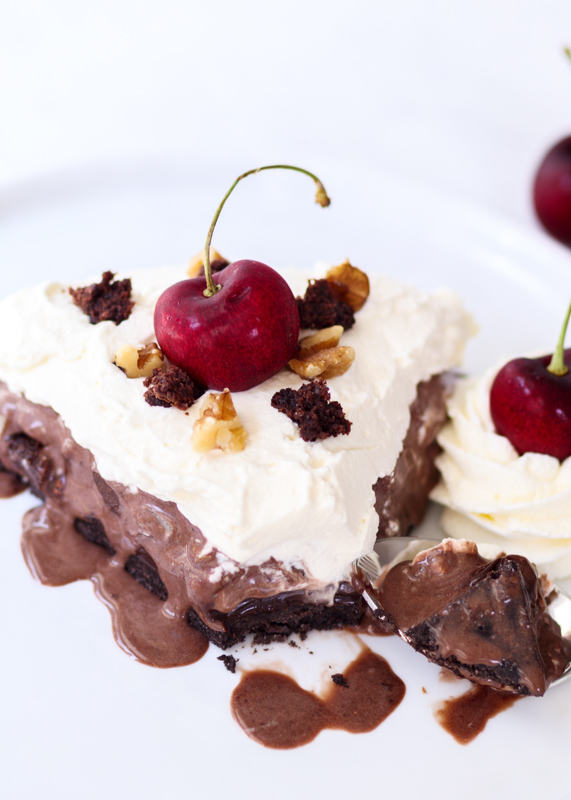 I can’t wait for you all to try this Hot Fudge Brownie Sundae Pie soon since it is so crazy criminally delicious. I have been trying to eat really well, but I could not avoid this one when it was sitting in the freezer! So be sure to make it soon, especially if you feel like living dangerously! Ha! 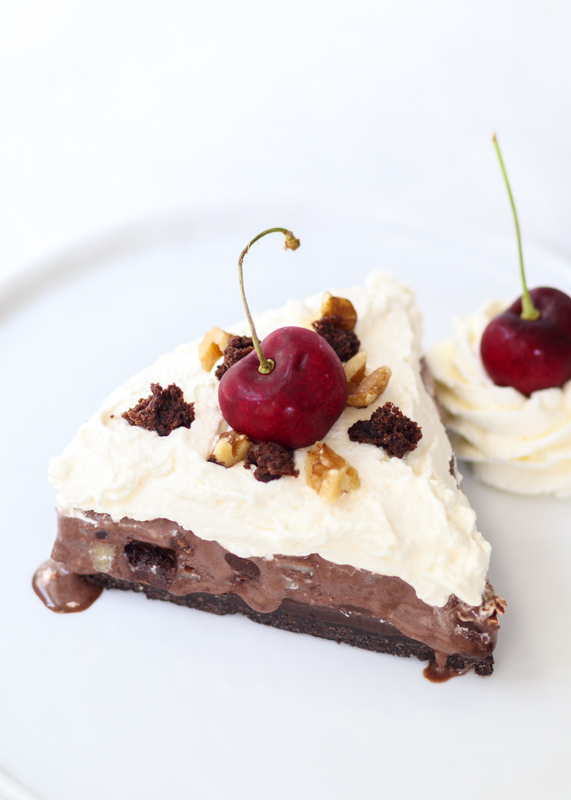