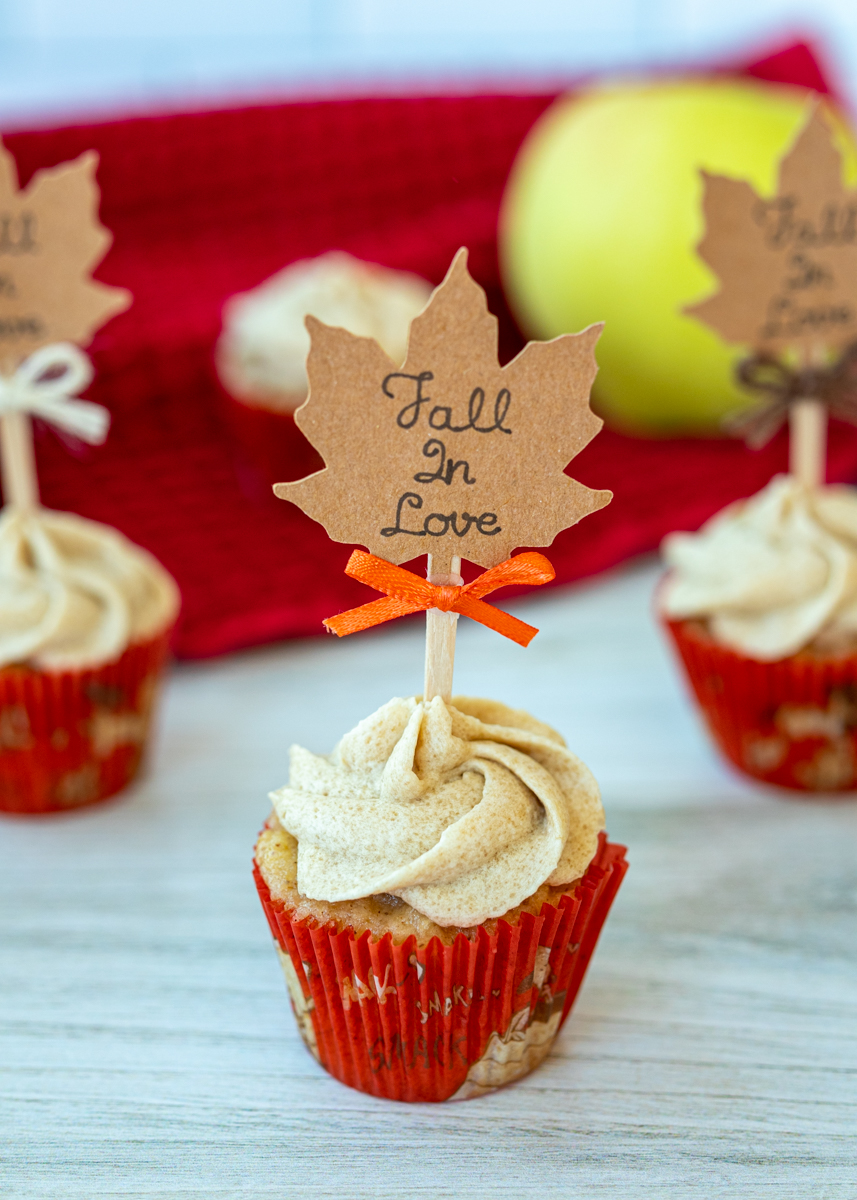 It’s time for the final seasonal cupcakes on Lemon & Mocha! Of course not the last seasonal cupcakes I’m ever going to post, just the final ones this year. For those of you who haven’t been following along, last year for my birthday my goddaughter gifted me with unique cupcake toppers from Etsy for each season. The cute toppers inspired plenty of delicious cupcakes all year long, including winter’s Hot Chocolate Cupcakes, the Strawberry Lemonade Cupcakes in spring and summer’s Classic Vanilla Cupcakes with Vanilla Buttercream. 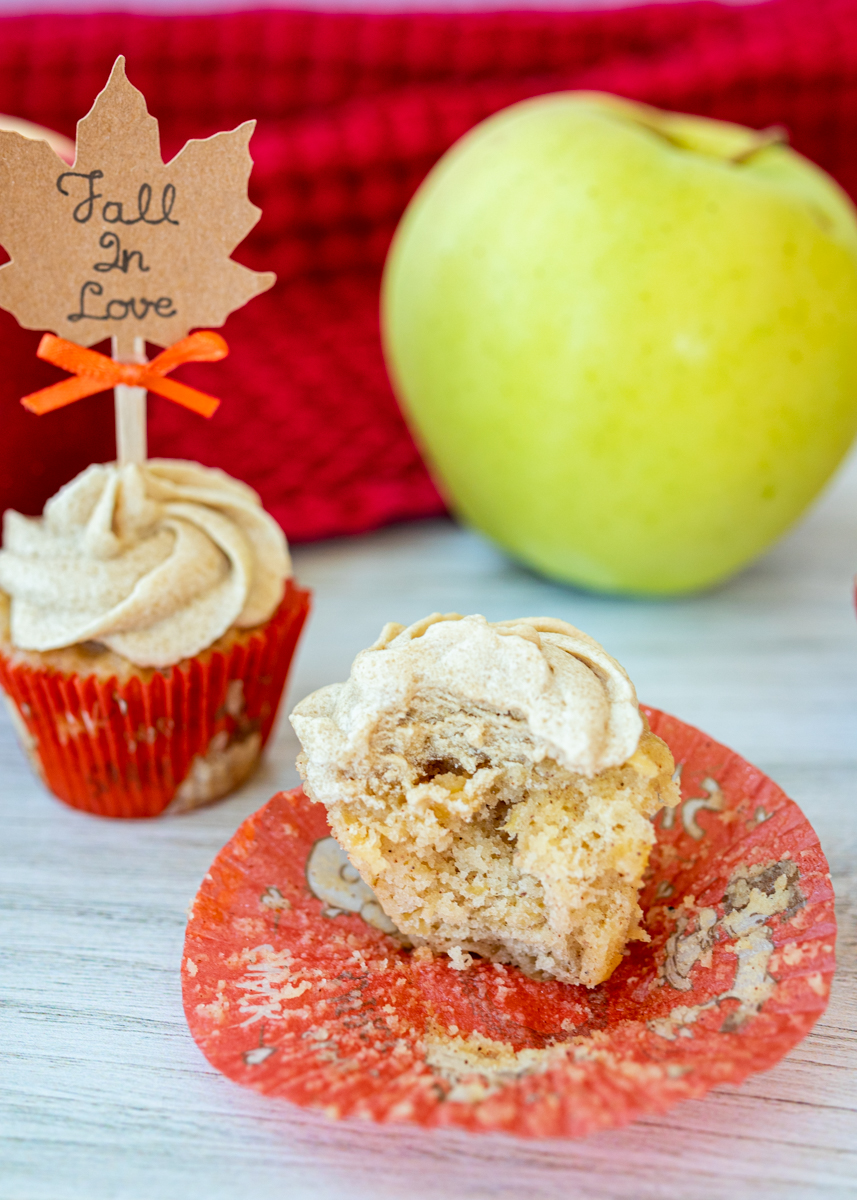 There are so many warm and inviting fall flavors to choose from so I decided to go with two of my favorites: apple and maple. These are Apple Spice Mini Cupcakes with Maple Brown Sugar Buttercream – and they are crazy delicious. The cupcake is moist, loaded with shredded apple and filled with plenty of the warming spices you find in apple pie, such as cinnamon, ginger and nutmeg. 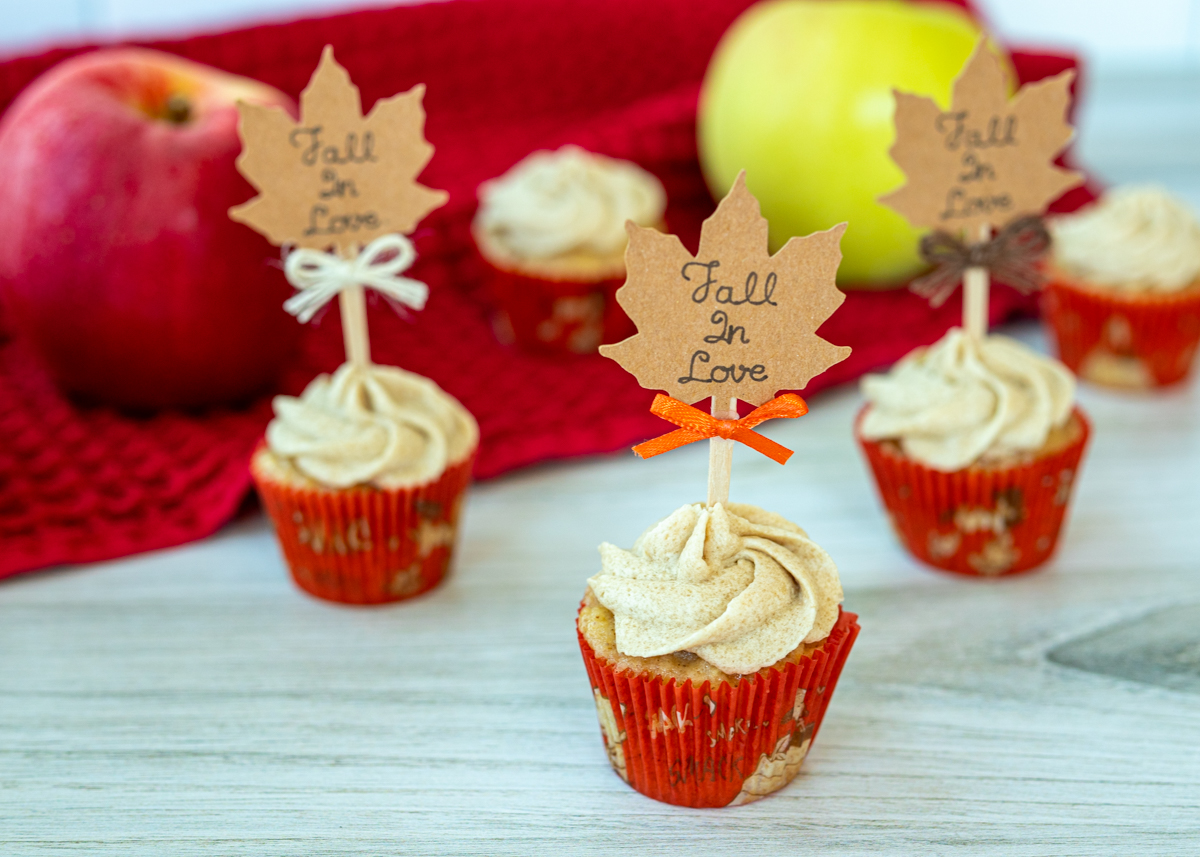 The buttercream on top balances both the maple and brown sugar flavors while bringing the perfect amount of sweetness to the little apple spiced cupcakes. There’s also a hint of saltiness in the buttercream, which really works well with the sweet flavors. 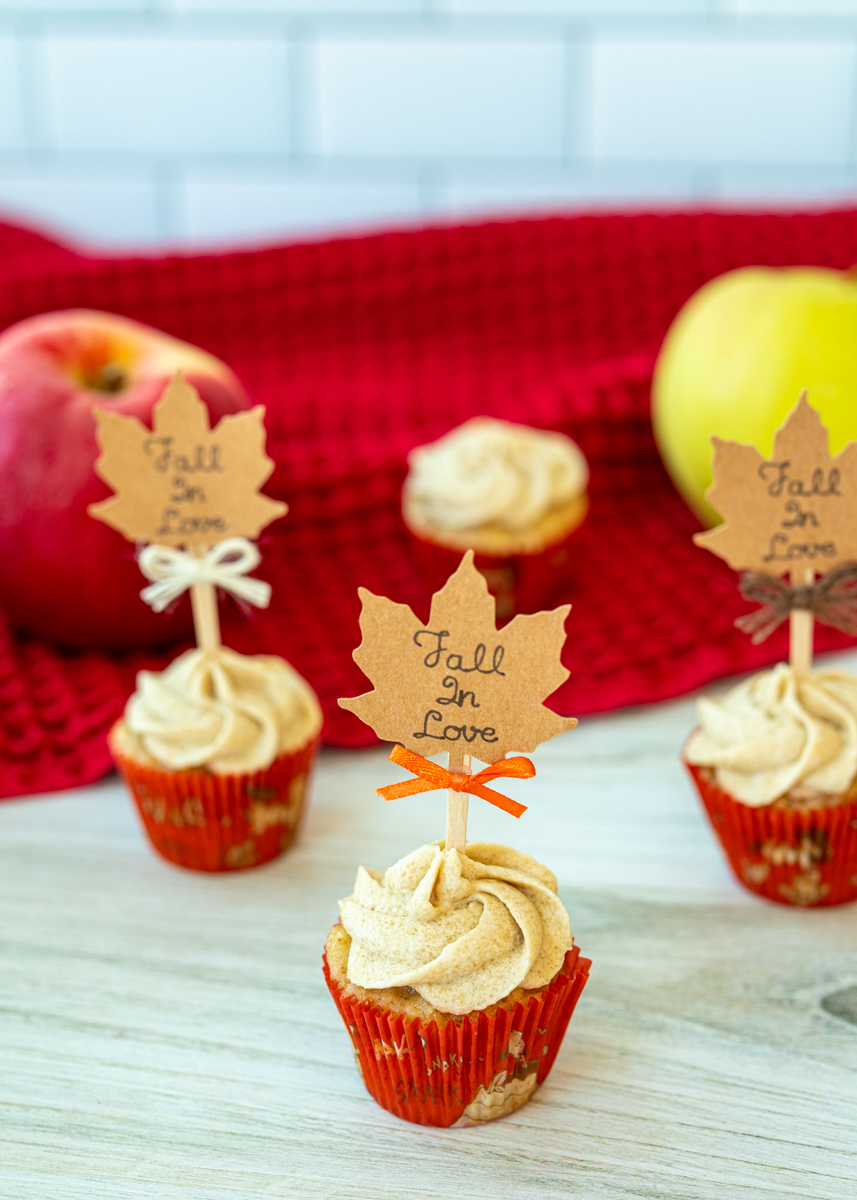 I chose to make mini cupcakes this time because I’ve been baking so many desserts that just a little mini cupcake (or two) was preferable to having a huge cupcake every time. They were super easy to frost with a piping bag, too, because each one just needs a little dollop of frosting. 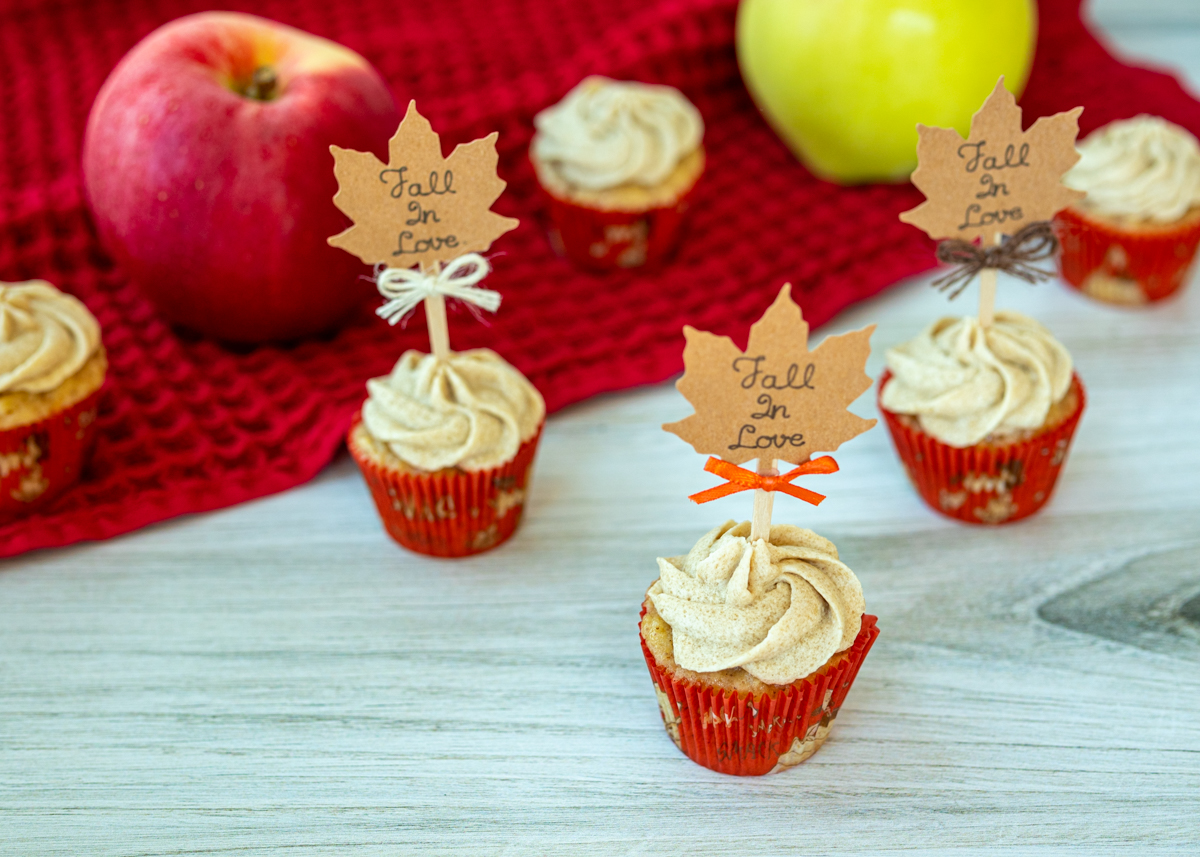 I was worried about making a cupcake filled with fruit because sometimes it can add too much moisture to the batter, as seen from a few failed experiments I had this summer. I’m excited to report that the combination of straining and squeezing the shredded apple dry to get as much liquid out as possible worked perfectly to allow for a moist apple-filled cupcake, while still having that light and springy texture an ideal cupcake should have. I hope you all love these cute fall mini cupcakes as much as we do! 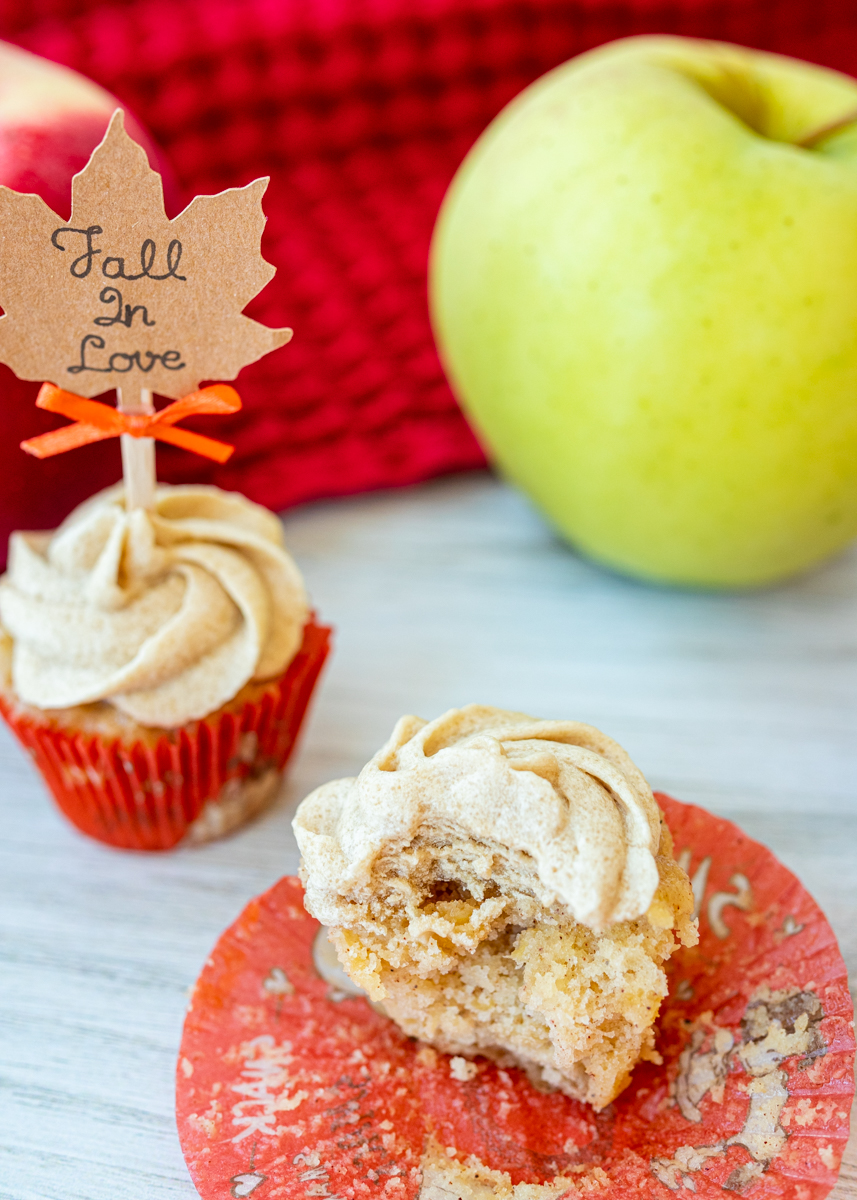 Print
Yield: 48 mini cupcakes
Ingredients
for the cupcakes
for the frosting
Directions
for the cupcakes
for the frosting
Notes
To make your own buttermilk: pour 1 tablespoon of lemon juice or vinegar in a liquid measuring cup. Pour milk, any fat percentage, into the measuring cup until you have ¾ of a cup. Let sit 5 minutes before using.
3.2.2802
Cupcake recipe adapted from Chowhound.
Frosting recipe adapted from Country Living.