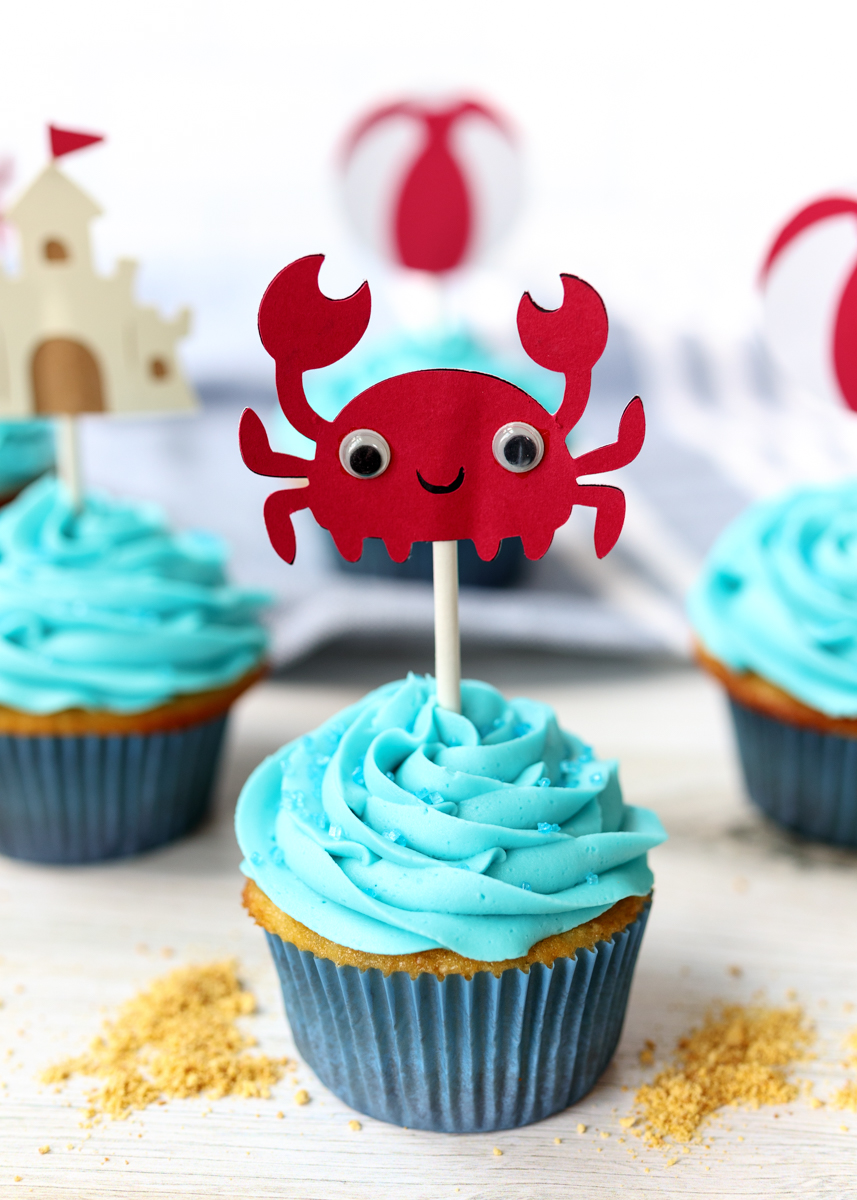 My summer cupcake post is here! I loved all the cupcake toppers my goddaughter sent me, but I think I was most excited about the summer ones. Look how adorable they are! The crab googly eyes get me every time. Since they are beach themed it felt appropriate to post them at the end of my family’s annual beach week. 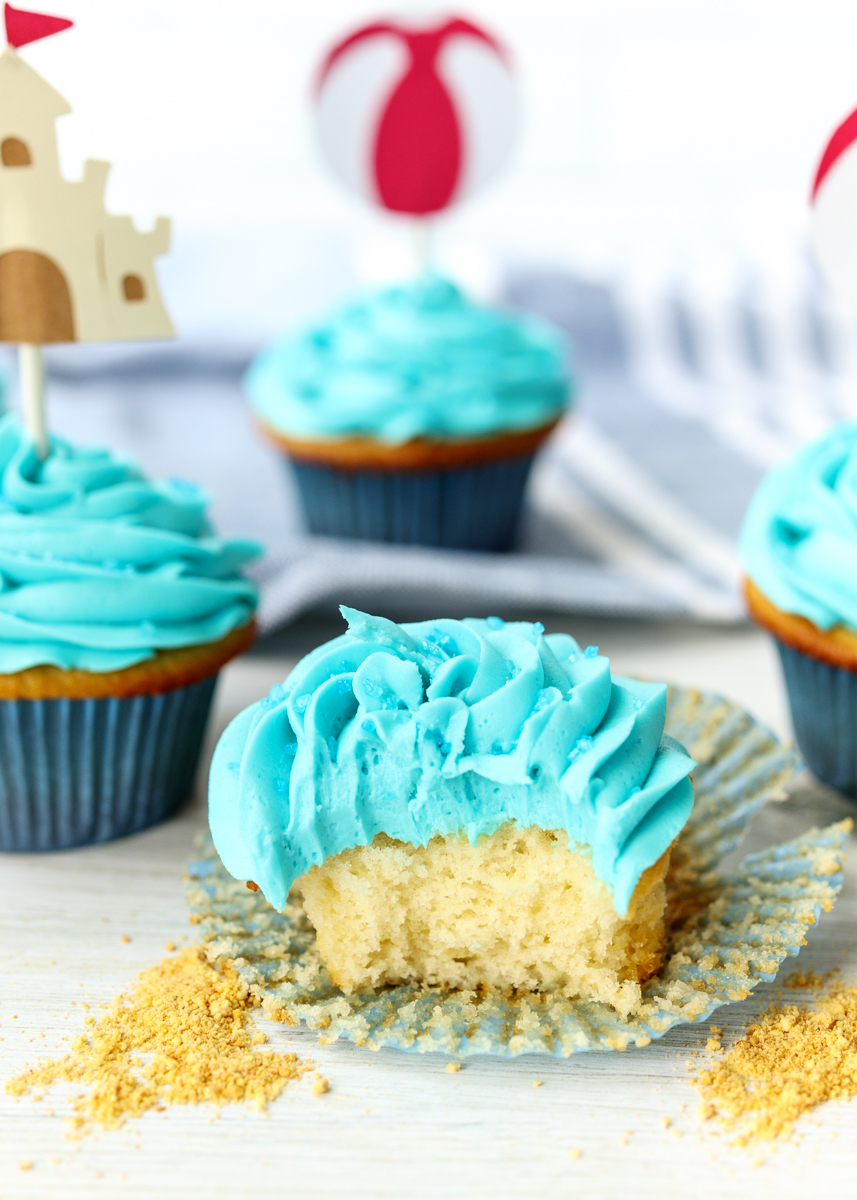 I know we’re already halfway through August (UGH), but thankfully these cupcakes are not just summer cupcakes. These are classic vanilla cupcakes with vanilla buttercream. And by classic I mean perfectly moist, extra fluffy, damn good vanilla cupcakes. Do you know how difficult it is to find a homemade vanilla cupcake recipe that tastes just as good – or better – than those made from a box mix? I’ve tried several over the years and I’ve been disappointed every single time. 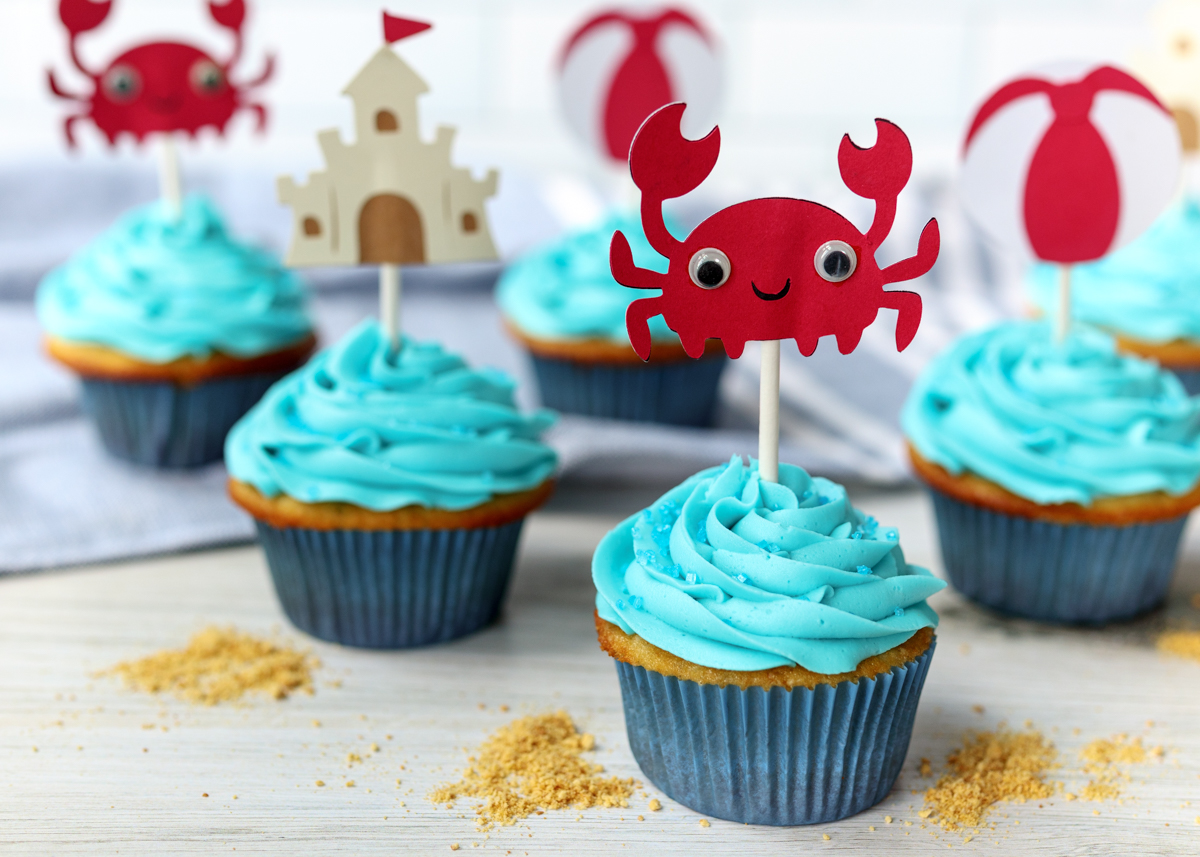 Last week I stumbled upon this delicious vanilla cupcake recipe through a happy accident. I initially was planning on making nectarine cupcakes for the summer cupcake post that were an absolute flop. I plan to revisit that recipe idea, but until then I really wanted to bake and photo something for this post before leaving for beach week the next day. 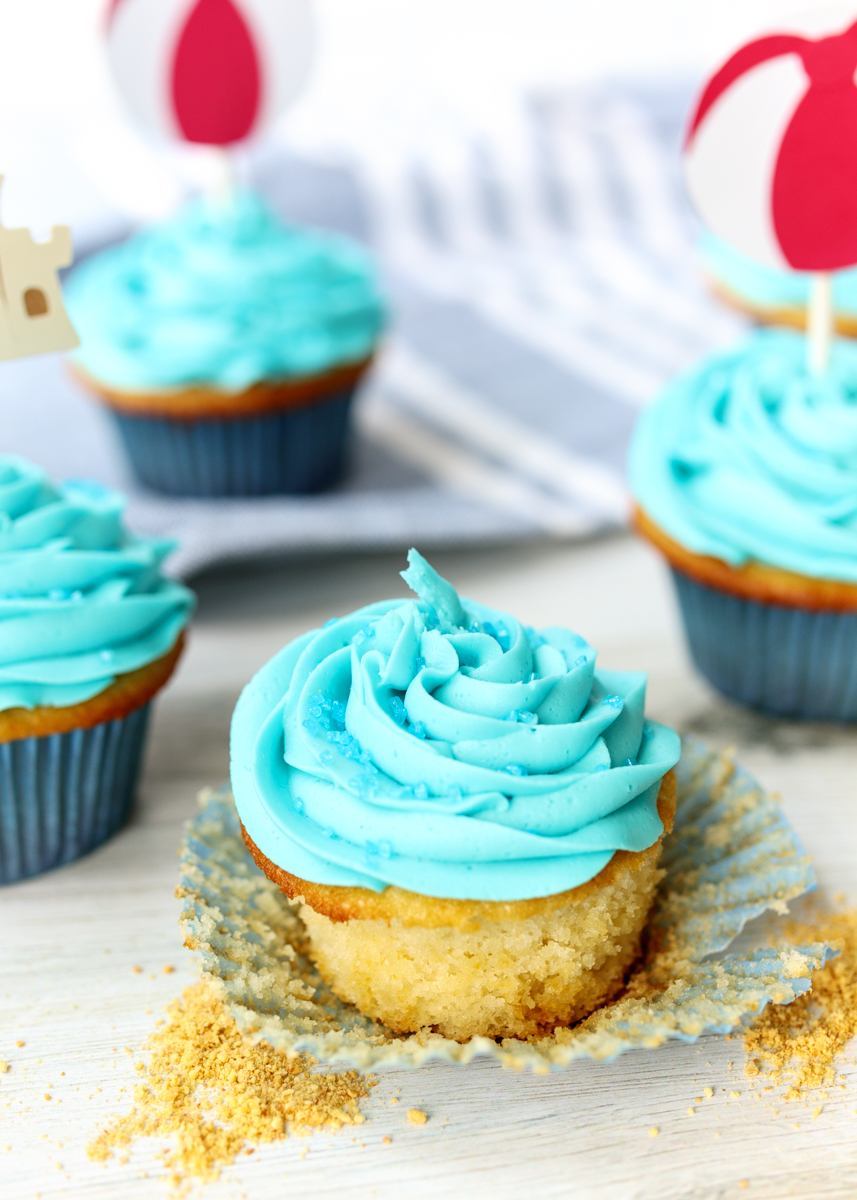 Deciding to revisit my perfect vanilla cupcake search I looked through all my cookbooks and Googled plenty, but there was one problem with every recipe: we only had one egg left in the fridge and I didn’t want to go to the store. I know, so lazy, but at least it led me to this recipe! Apparently there’s an old-fashioned recipe called a One Egg Cake from the Joy of Cooking and it requires minimal ingredients, is very simple and makes outrageously fluffy cupcakes! 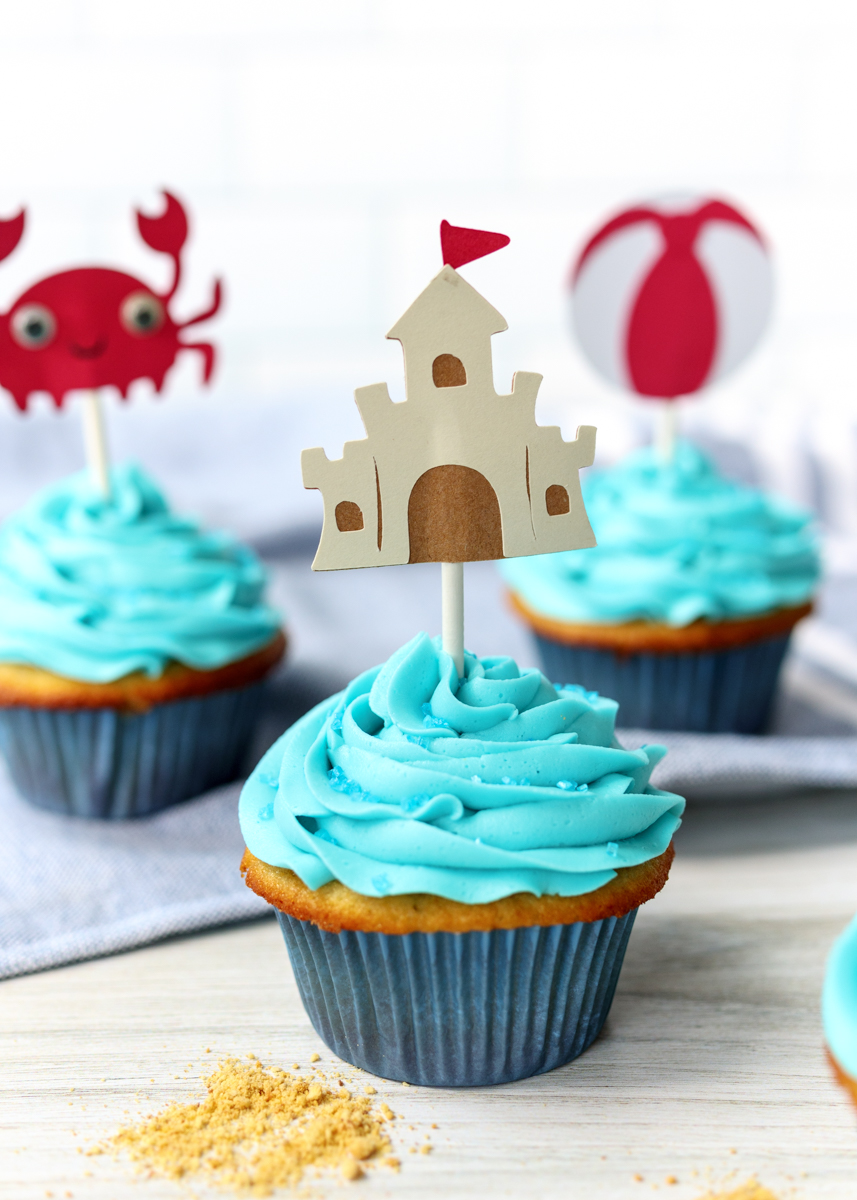 I paired these with a traditional vanilla buttercream because sometimes you’re just dying for a classic vanilla-vanilla combo piled high with frosting like you would get at a birthday party. I used a pastry bag fitted with a Wilton 2D tip to frost these cupcakes. If you want something lighter and less sweet then I recommend my mascarpone frosting. Or if you want something chocolatey then definitely make my Perfect Chocolate Frosting. Of course, if you want to turn them into summer cupcakes then make sure to dye the frosting blue and add cute cupcake toppers! Enjoy, friends! 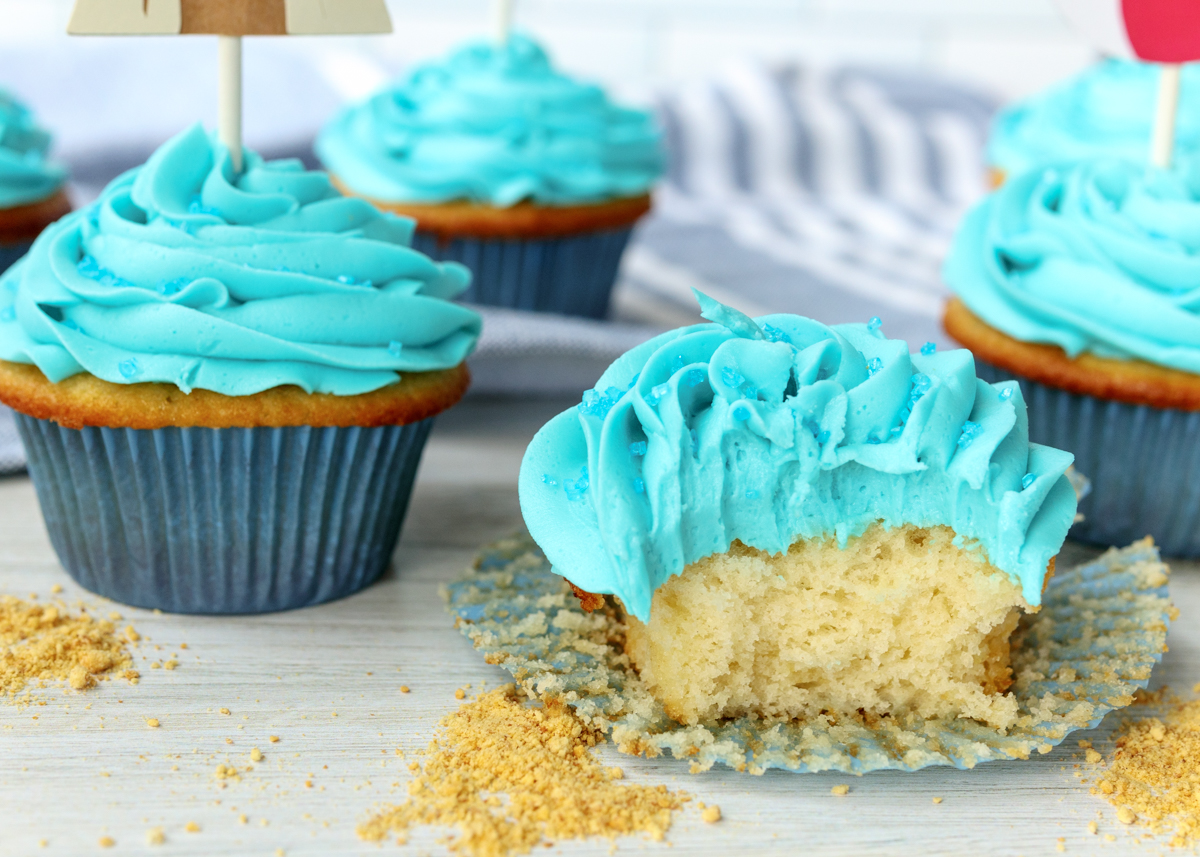