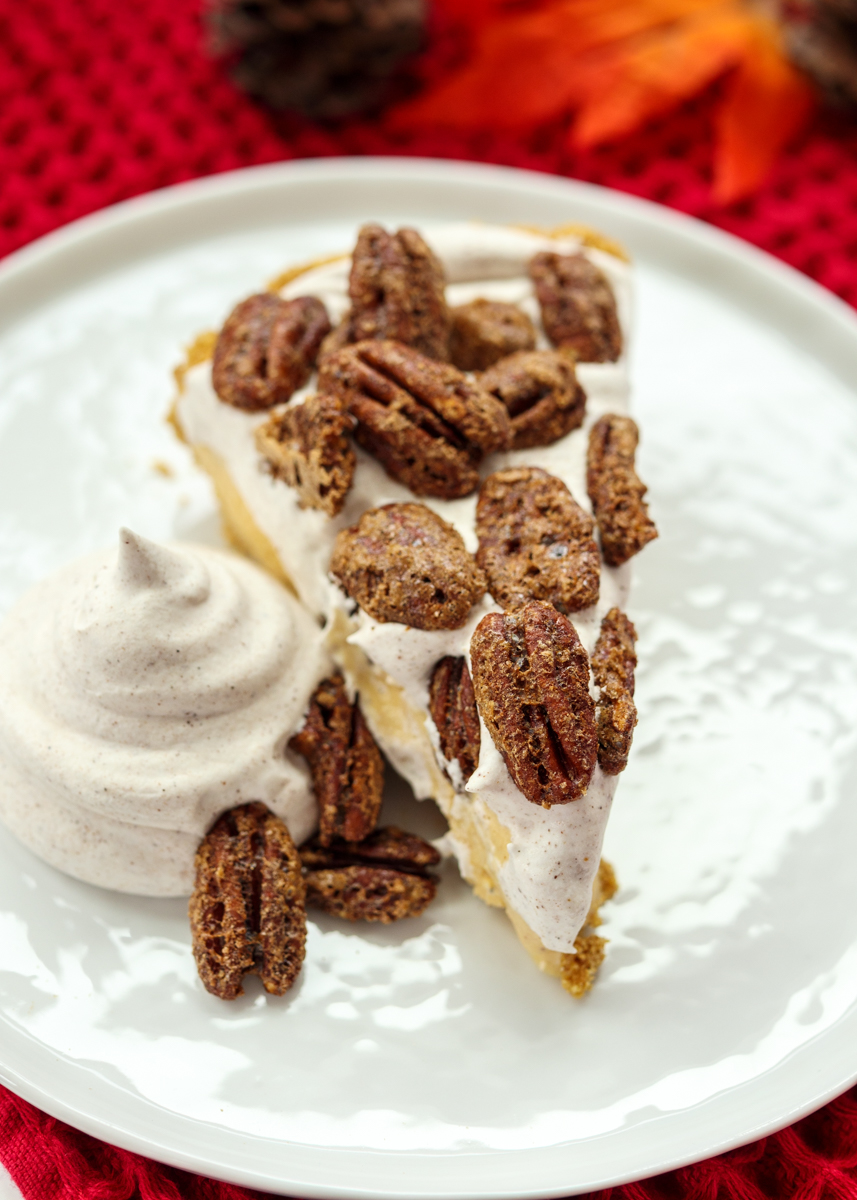 Pumpkin Pecan Ice Cream Pie went down in the Lemon & Mocha kitchen and it was as amazing as it sounds (and looks)! When I was brainstorming what desserts I wanted to share for Thanksgiving I knew I was going to make the Pumpkin Cheesecake Trifle, but I wasn’t sure about my second dessert. Usually for Thanksgiving everyone immediately thinks of pie and my pie-loving husband has converted me into a pie fan over the years. I don’t like to share recipes on Lemon & Mocha that I’m not 100% satisfied with and while I have made a bunch of really great tasting pies, I wouldn’t say I’ve perfected them yet. However, there is one type of pie I have perfected, if I say so myself, and that is ice cream pie.

I have made many, many ice cream pies over the years and I’ve shared a few on here as well, although not nearly enough! I’ll work that into the schedule for 2019. Graham crust, cookie crust, ganache-topped, candy filled, cake filled – you name it, I’ve whipped it up. I may have even eaten a slice or two. Clearly I’m kidding, many, many slices have been consumed, all in the pursuit of perfection though. 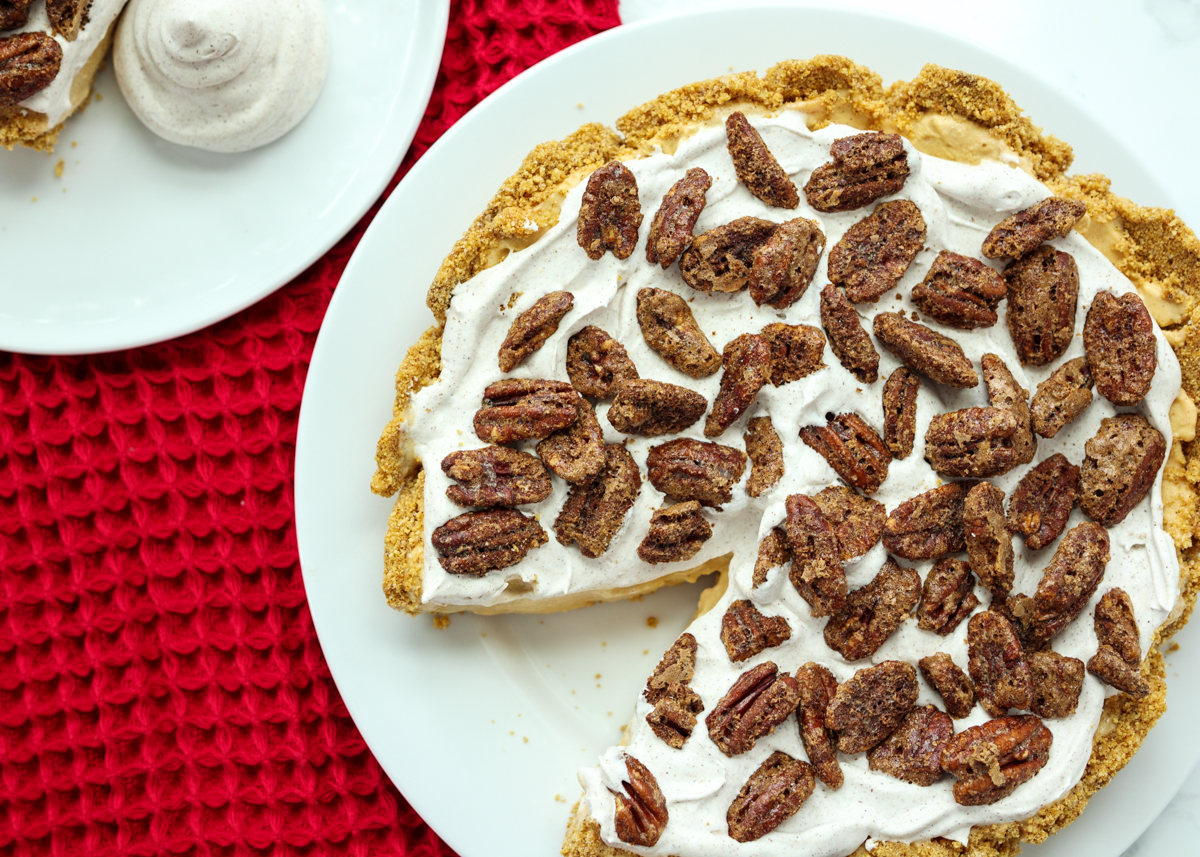 This Pumpkin Pecan Ice Cream Pie is a nice break from the traditional Thanksgiving dessert table and the big bonus is that it’s so easy. Like so easy I even waited until the week of Thanksgiving to share it because you barely need any time to put it together. Although it is quick to make, it does require at least eight hours of freezing time so definitely read the instructions all the way through and plan accordingly.

The base of this ice cream pie is a regular graham base with some cinnamon and ground ginger mixed in for that warm spiced holiday feel. Then we have pumpkin ice cream. You could certainly make your own and if you need a recipe I have had great success with all of David Lebovitz’s recipes from The Perfect Scoop. I had just come back from my vacation last week so I went the easy store-bought route, especially since so many brands have delicious-sounding pumpkin flavors right now. I bought the Talenti pumpkin gelato; it was really creamy, packed with rich pumpkin flavor and even had pie pieces in it – bonus! 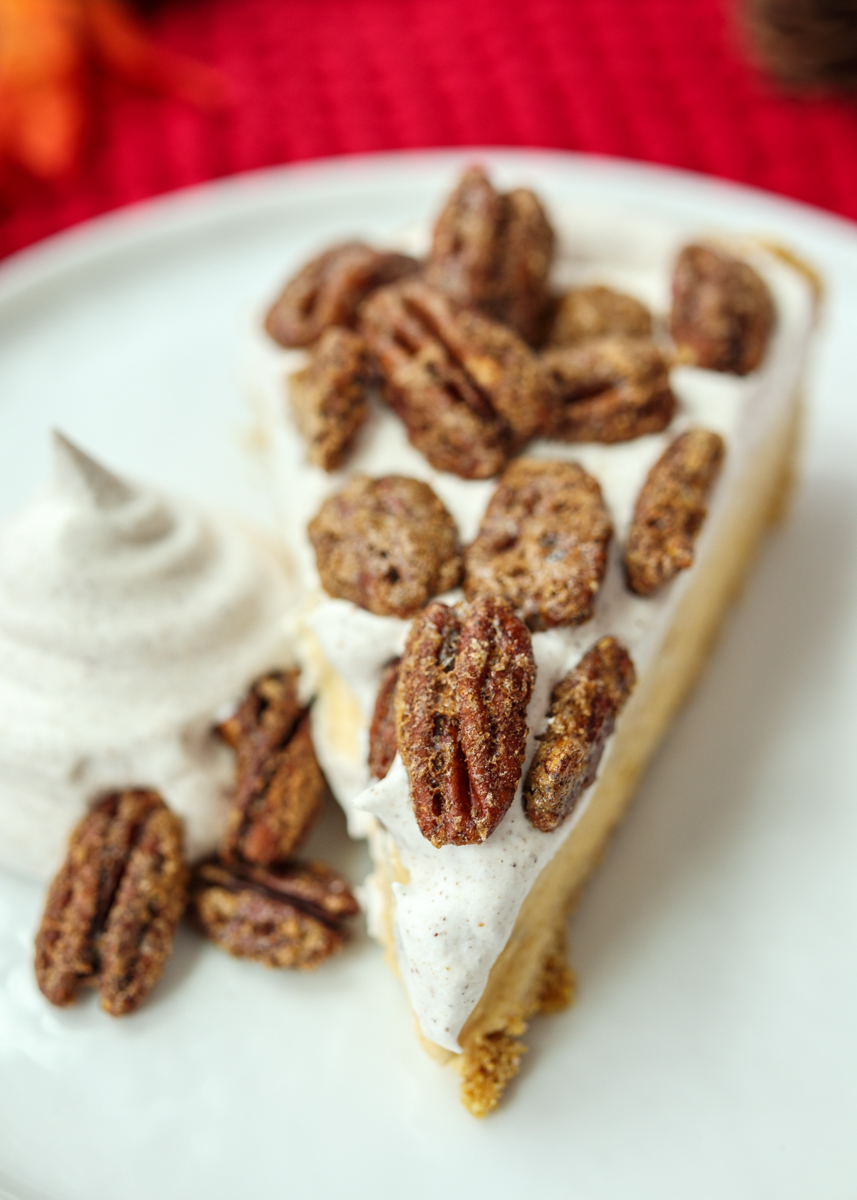 On top with have whipped cream and homemade sugared pecans. These pecans are tossed in egg whites and pumpkin pie spices then baked. They are so addictive, especially when they’re warm, so it was really difficult saving them for this pie! I find that ice cream tends to be a universal crowd pleaser and I know from experience there’s a lot of ice cream crazed families out there so this is the perfect Thanksgiving dessert. Although I highly recommend pumpkin ice cream you could certainly substitute a different ice cream flavor of your choice, just don’t skip those candied pecans! Enjoy!

Print
Yield: 8-10 servings
Ingredients
for the pie
for the pecan topping
Directions
for the pie
for the pecan topping
Notes
If you want to use homemade whipped cream, follow these instructions. In a cold metal bowl of a stand mixer or in a large cold metal mixing bowl with a hand mixer, use cold beaters to beat 1 cup cold heavy whipping cream, 2 tablespoons of granulated sugar and the remaining teaspoon of cinnamon until stiff peaks form. Do not top put on the ice cream pie until you’re ready to serve it. You can make the whipped cream a day or two ahead, just store it in the fridge until you’re ready to serve then lightly beat with a whisk before topping the pie.
3.2.2802
Some of the links above are affiliate links, which means I may receive a small commission for my referral. This does not affect the retail cost of the item. Thank you for supporting Lemon & Mocha!