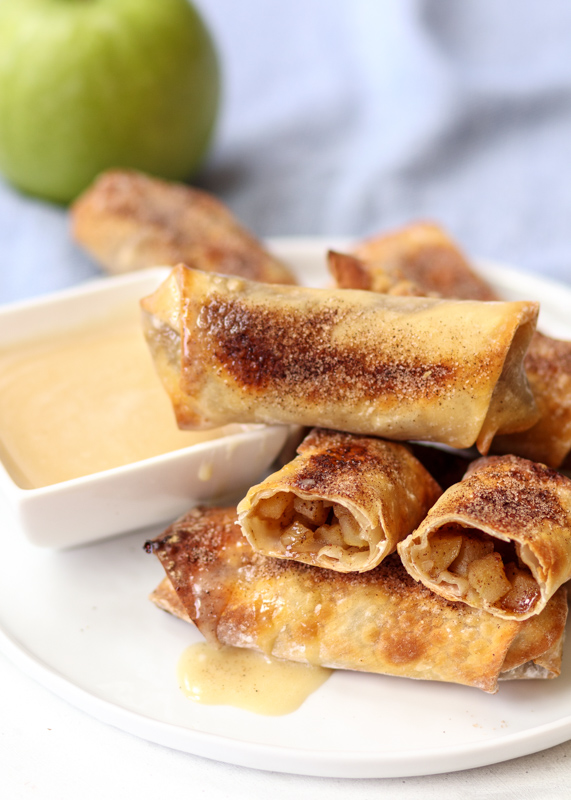 It’s peak apple picking season! Oftentimes it doesn’t feel like fall here until September is almost over so I’ve always associated apple picking with October. However, a few years ago Matt and I went apple picking with Matt’s parents at an orchard by them in Connecticut during the second week of October only to find that there were almost no apples left! Apparently while we were waiting for it to start feeling like fall we had missed peak season for apples. So today I’m sharing some apple goodness so you can join in while there’s still plenty of apples to be picked, stuffed into cinnamon sugar egg roll wrappers and eaten. 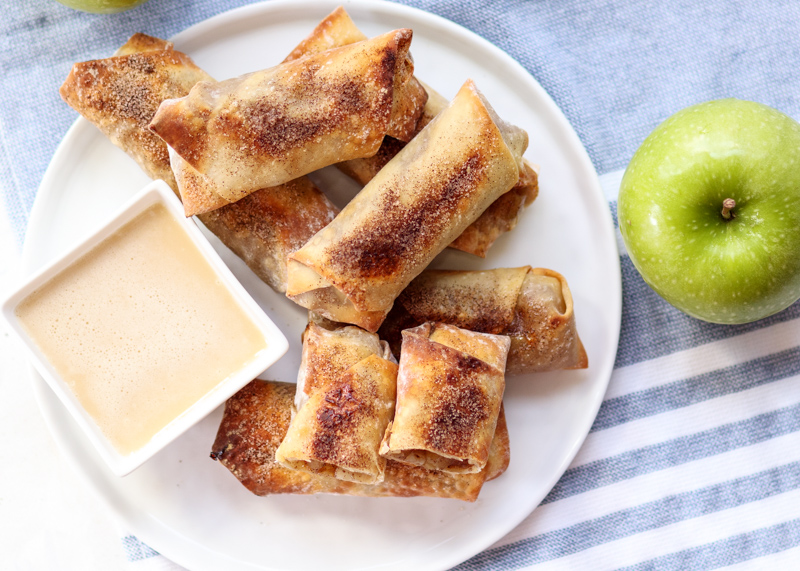 I wanted to make an easy apple dessert that would be quick to whip up so I started thinking about apple dumplings. There’s a lot of recipes on Pinterest that combine apples with crescent dough and while that sounds delicious I was looking to make something slightly less indulgent. Then I remembered my Southwest Turkey Baked Egg Rolls. I loved how crispy the baked egg rolls got that I had already started brainstorming other variations, but what about a sweet dessert variation? 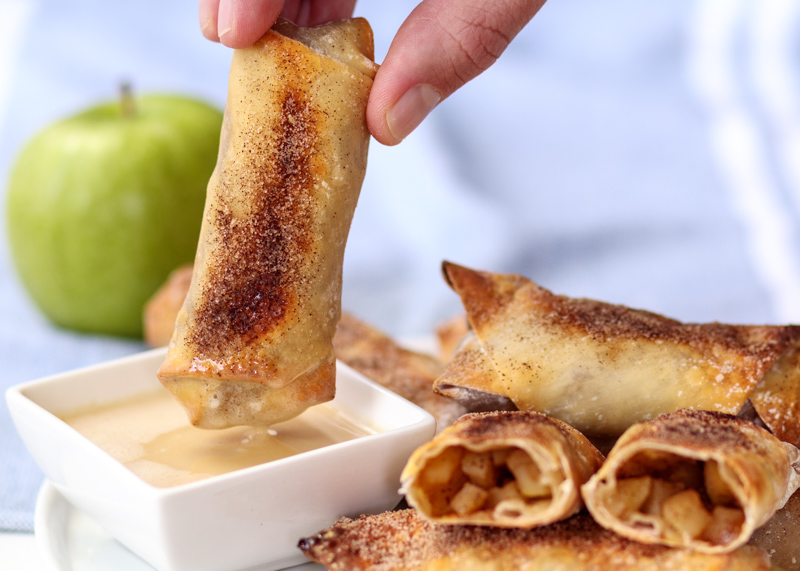 When I tried one of these Crispy Baked Apple Pie Bites out of the oven they tasted even more outrageous than I was imagining. The spiced apples cooked down just the right amount so the soft apples contrast perfectly with the crunchy cinnamon-sugar coated outside. They’re also so easy to put together! There’s no cooking required except for letting them bake in the oven and as I talked about in my Southwest Turkey Baked Egg Rolls post, folding the filling up into these egg roll wrappers is way easier than you would think. 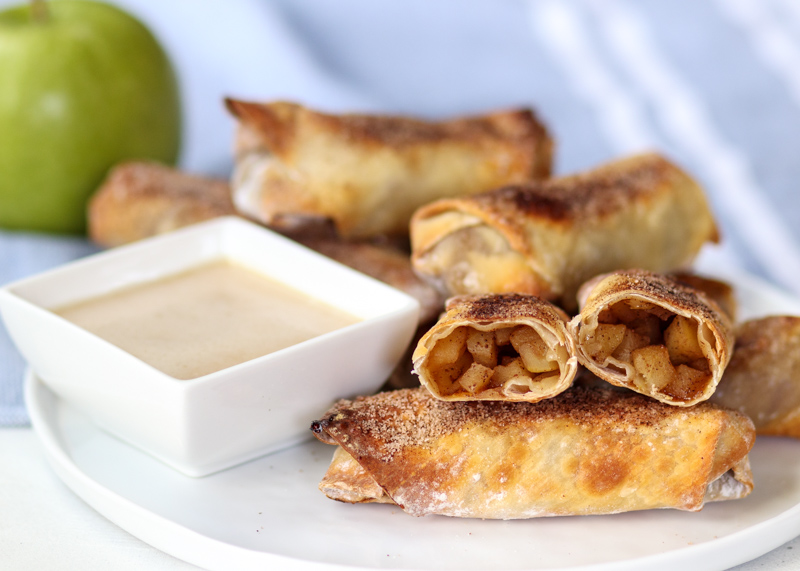 Once they are done cooking you get to indulge in the best part – dipping them in the vanilla chai dipping sauce. Simply powdered sugar, brewed chai tea and vanilla extra, this dipping sauce complements the Crispy Baked Apple Pie Bites really well. Chai tea is full of warming spices that are reminiscent of fall bringing a nice depth of flavor to a traditional vanilla glaze. 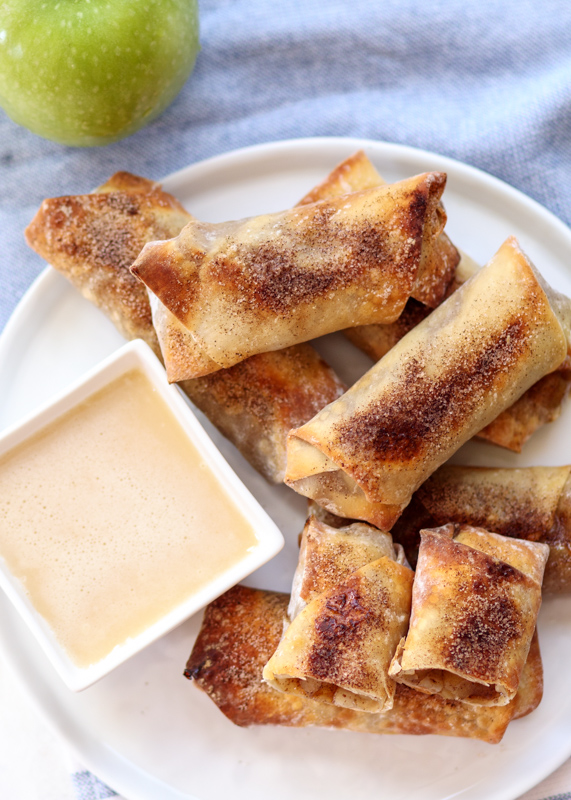 Also, by using brewed tea instead of the traditional milk or cream we are keeping the entire recipe dairy free, dipping sauce included, if that sort of thing is important to you. So between the fruit, the baking instead of frying, only using cooking spray and keeping them dairy free we totally have a healthy dessert on our hands right?! Okay, maybe not “healthy”, but definitely healthier than other desserts I’ve posted here so I’m going to go with just a eat a whole bunch of them and have no regrets, friends! 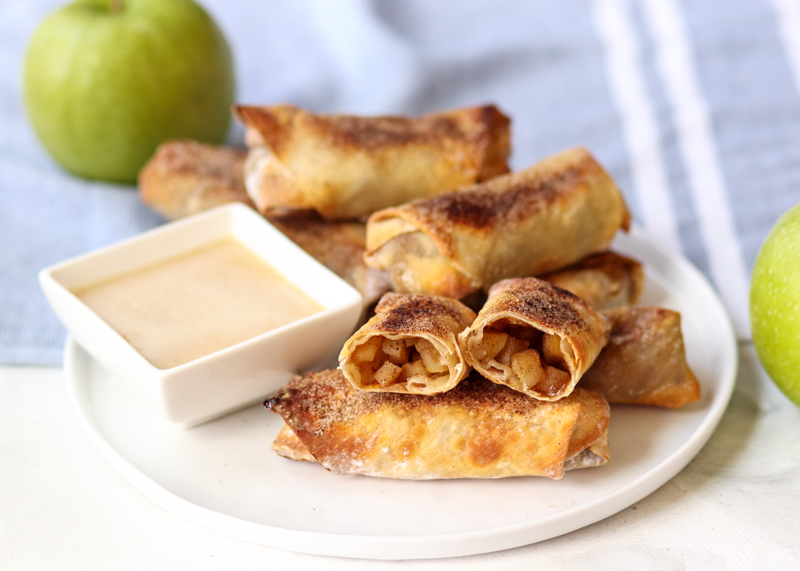 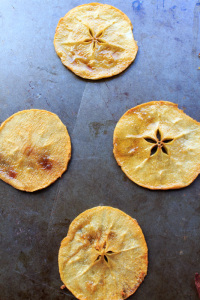 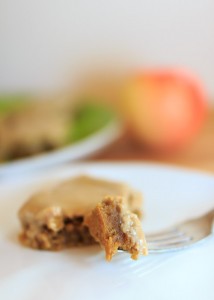