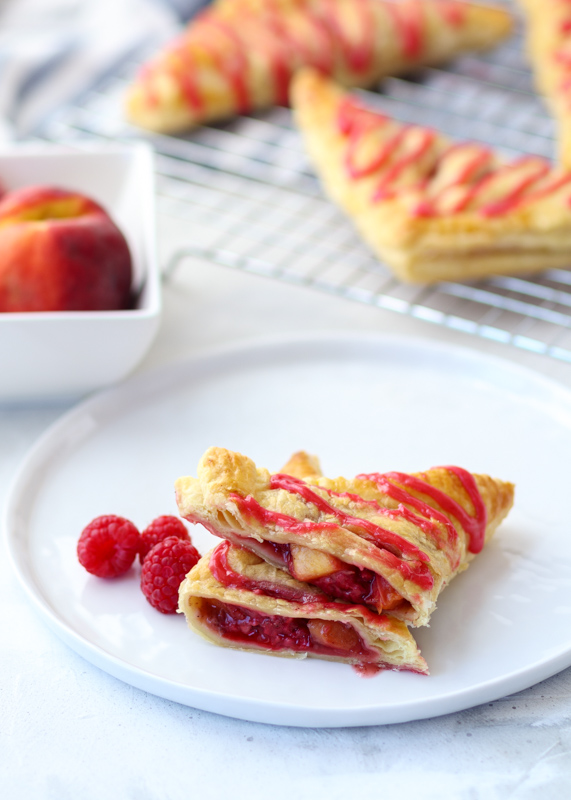 I have a huge dessert obsession, except when it comes to fruit pies. I love key lime pie, pumpkin pie, pecan pie and definitely ice cream pie, but I’m fairly indifferent when it comes to fruit pies. Matt, on the other hand, has a huge fruit pie obsession, specifically cherry pie. Usually if there’s a fruit pie I might take a bite, but that will be the extent of it. However, a few years ago, Matt’s parents came to visit and brought a Raspberry Peach Pie from an orchard near their house. Raspberry is one of Matt’s favorite fruits, but it definitely isn’t mine. I figured I would try a bite and that would be the end of it. Instead, I couldn’t stop eating the Raspberry Peach Pie! The tartness of the raspberries mixed with the rich sweetness of the in-season peaches had me hooked. 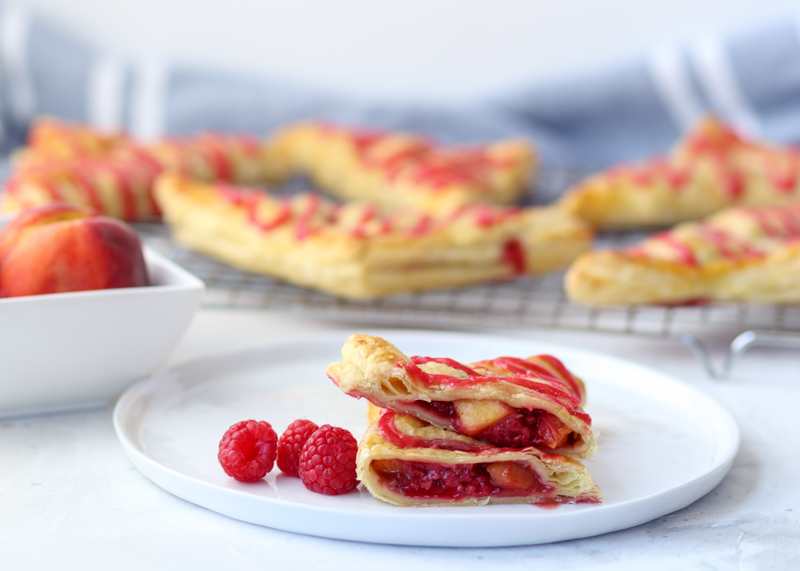 I’ve been wanting to recreate that pie for years, but I haven’t been adventurous enough in the kitchen with pie making. I’ve also been all about simple recipes this summer so I brainstormed how I could still get that same mouthwatering combination in an easier manner than test-baking pies all summer. The answer was easy – Raspberry and Peach Turnovers! I love working with store-bought puff pastry because it’s ready to use as soon as you thaw it. If you’ve never bought puff pastry before you can find it in the freezer section of your grocery store, usually near the other frozen desserts and fruit. 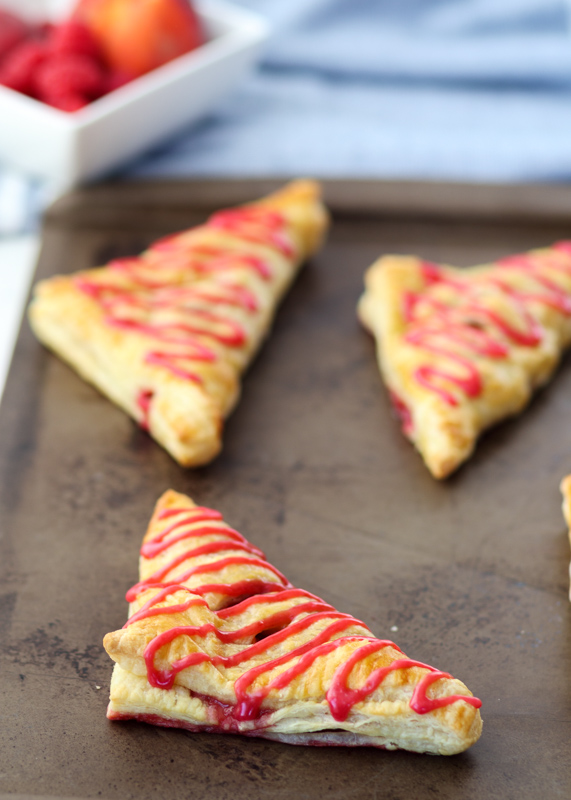 Peaches are in peak season right now and I’ve been getting some super sweet and juicy ones at the store. I tossed the fresh peaches with raspberries, cinnamon and a little brown sugar for some added sweetness. The fruit mixture gets stuffed in the puff pastry before being topped with an egg wash and baked until golden brown. The heat of the oven reduced the raspberries to an almost jam-like texture in the turnovers, which paired really well with the sweet peaches and cinnamon flavoring. Pie crust is good, but for me, puff pastry takes the pie. It’s light, flaky and definitely buttery.

Since the Raspberry Peach Turnovers are so simple on their own I decided to give them a little something extra. You could top them with powdered sugar OR you could drizzle them with this easy fresh raspberry glaze. Look how pretty the glaze looks on the turnovers! The glaze also helps bring in some additional raspberry flavoring and sweetness. Don’t be shy with the glaze; after I took these photos I smothered the turnovers with all the rest of the glaze! 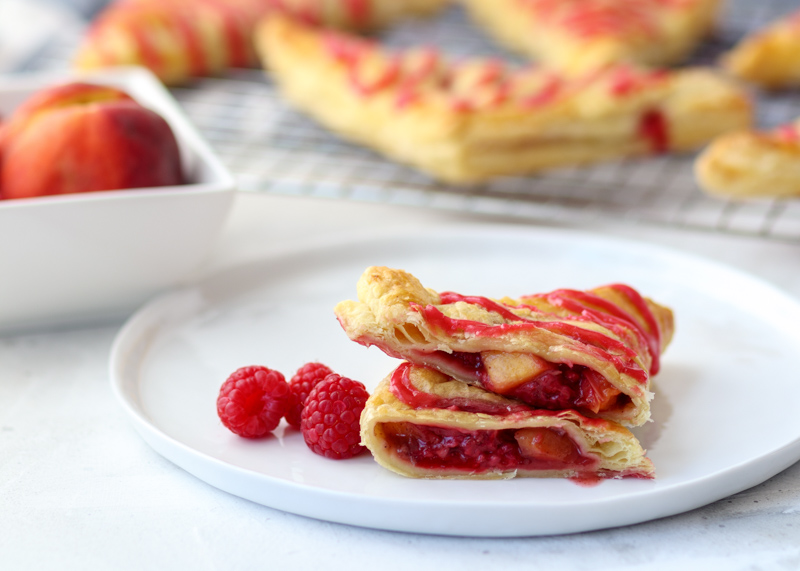 One bite of these turnovers brought me right back to that raspberry peach pie, but I love how easy then puff pastry turnovers are. These are perfect to make for a brunch treat, a fruity dessert or simply because you have fresh raspberries and peaches to use. The bulk of the turnover is the fruit so make sure your fruit is ripe and bursting with fresh summer flavor! 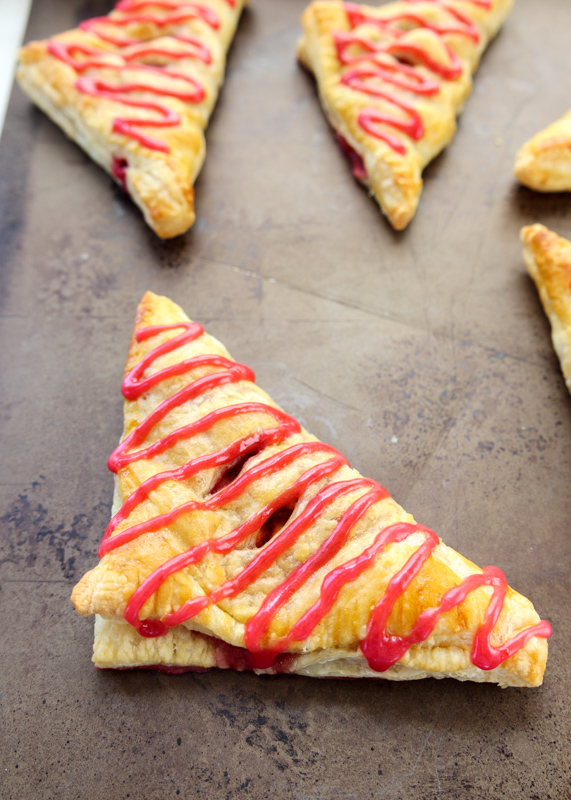 Print
Yield: 8 turnovers
Ingredients
for the pastries
for the glaze
Directions
for the pastries
for the glaze
Notes
You want to try to touch and work with the puff pastry the least amount of time possible because touching it makes the pastry warm, which means less of a rise during the baking. I leave the second roll of puff pastry in the fridge until I’m done working with the first one.
The amount of brown sugar you want to use may depend on how sweet or tart your fruit is. I found 1½ tablespoons to be the perfect amount of sweetness for us when we used in-season raspberries and peaches.
3.2.2802