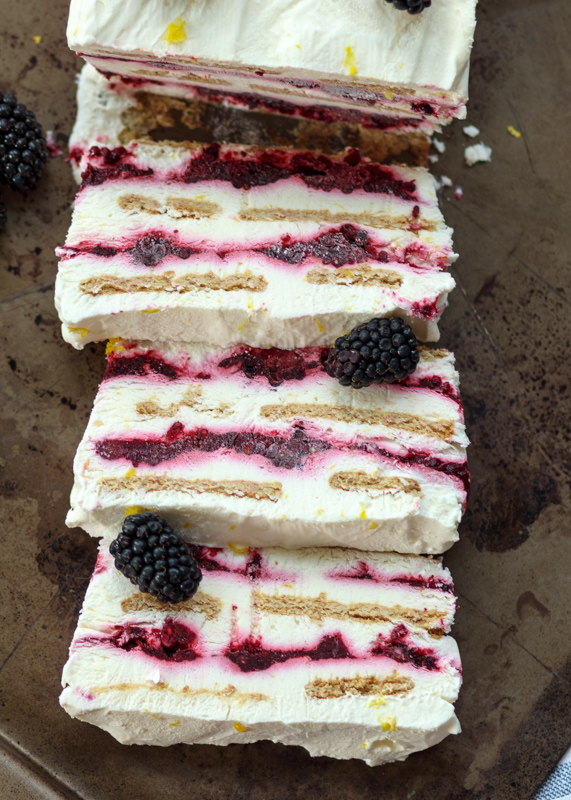 We’re starting Monday off with a bang! This super simple no-bake Lemon Blackberry Ice Box Cake is channeling summer as we try to soak up the last week of August. I love lemon flavors all the time, but I especially love eating it in the summer since it makes me think of fresh ingredients and sunshine. Combine the lemon with some fresh plump blackberries and we are in full summer mode over here! 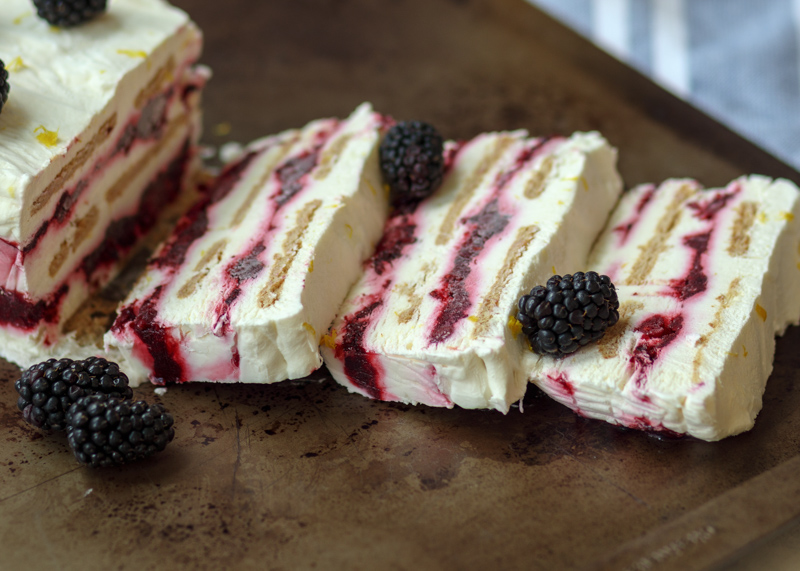 I made this cake because I wanted to participate in Sally’s Baking Challenge over on Sally’s Baking Addiction. If you aren’t familiar with her blog, she posts a new challenge recipe every month to inspire more people to bake. I participated last month making cherry hand pies you can check out over on my Instagram and I had so much fun that I decided I wanted to participate again this month. The challenge for August is a chocolate chip cookie layer cake, which sounds amazing, but it is HUGE. Since there’s so many challenge months I missed out on, I decided to head into the archives and make a dessert from a past challenge. 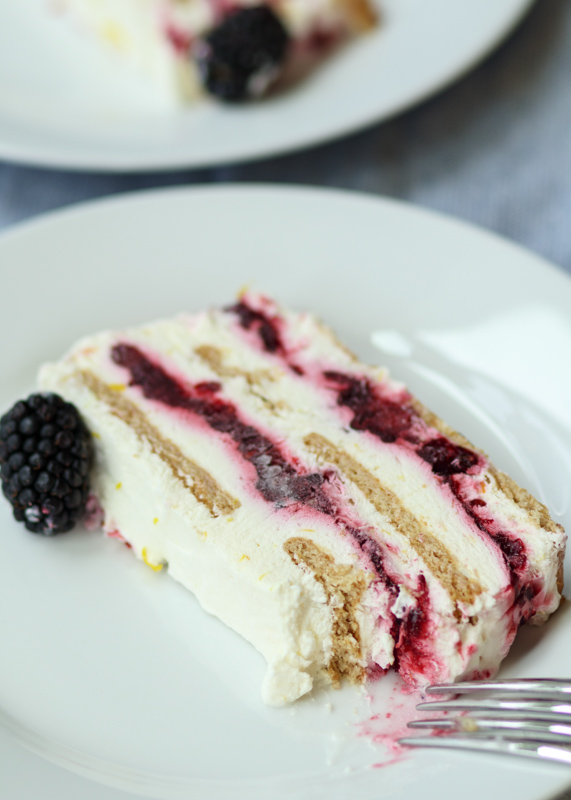 Last year, she posted one for a lemon blueberry icebox cake. Matt’s not a blueberry fan so we settled on blackberries and that’s how this cake came to be on your screen right now. Well after I made it, photographed it, edited it and loaded it up of course. While all that was happening, this light and tart cake was devoured so it’s safe to say it was a big success. Don’t be fooled by the challenge part; icebox cakes could not be easier since there is absolutely no baking involved. 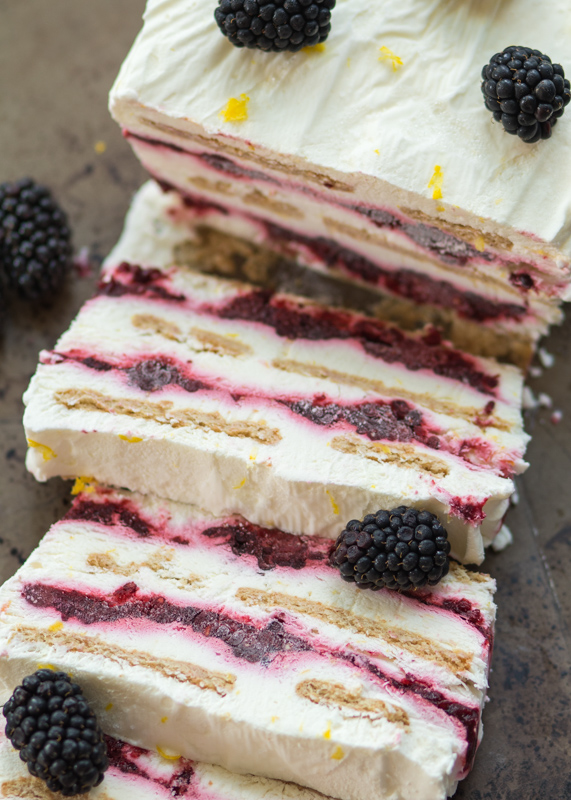 Even though I’ve eaten plenty of them, I’ve actually never make an icebox cake before. An icebox cake is typically made by layering cookies and whipped cream then placing it in the freezer. The cookies soak up moisture from the whipped cream and develop a soft “cake-like” texture. This version has multiple layers and each of them have me doing a happy dance. 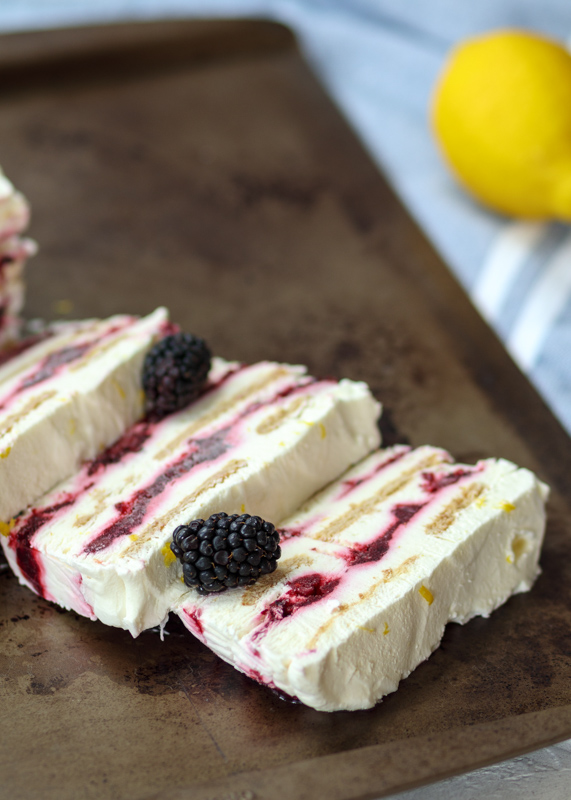 First, for our cookies we’re using graham crackers. You will need about six full-sheet graham crackers, which is just shy of one whole sleeve. For the whipped cream layer we are making a quick homemade lemon whipped cream. Beat together heavy cream, powdered sugar, lemon juice and lemon zest until you have soft peaks – done! I love a pillowy homemade whipped cream, but the brightness from the lemon takes it to a new level. 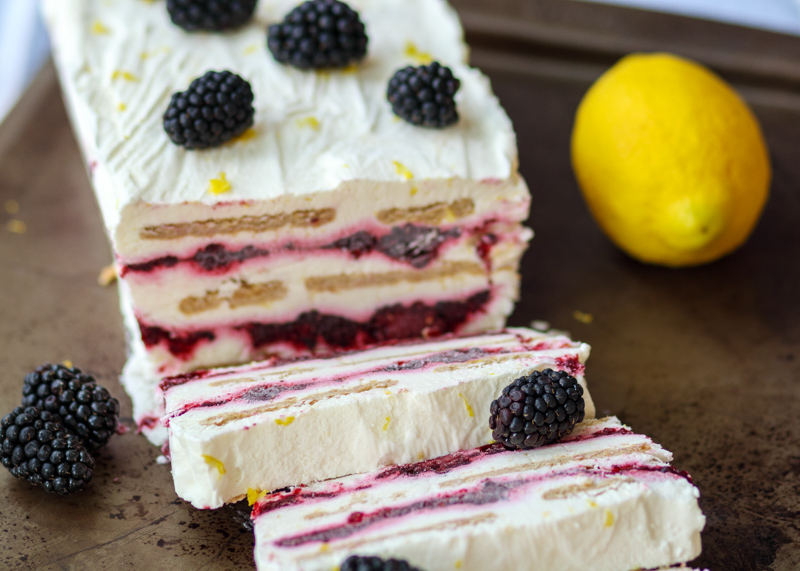 Finally, we have our homemade blackberry sauce that you can make with a saucepan in under ten minutes. We’re going to layer each component multiple times so you have a show-stopping cake slice like the ones pictured here that will have everyone thinking you spent hours in the kitchen. Below is a quick shot I took to show you how I layered the graham crackers; it doesn’t have to be perfect. 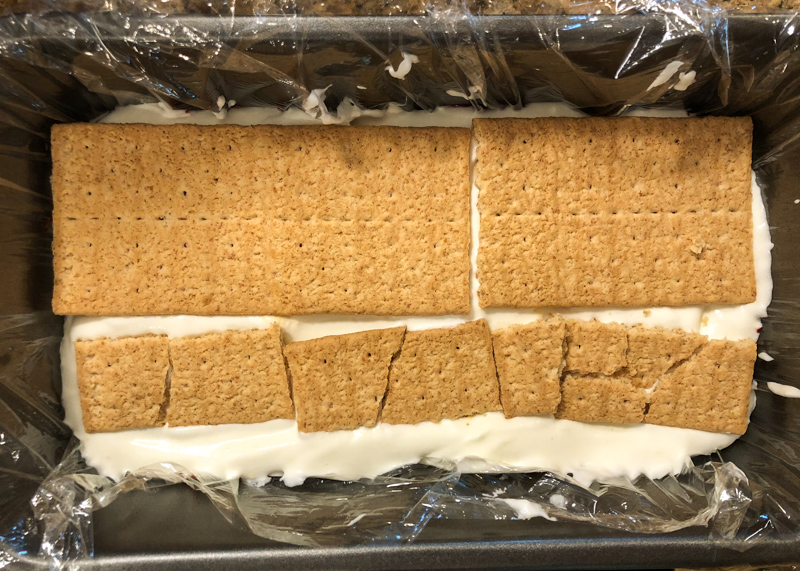 I can’t wait for you all to try this one! I’ll be busy over here dreaming up other icebox cake variations to make in the near future. 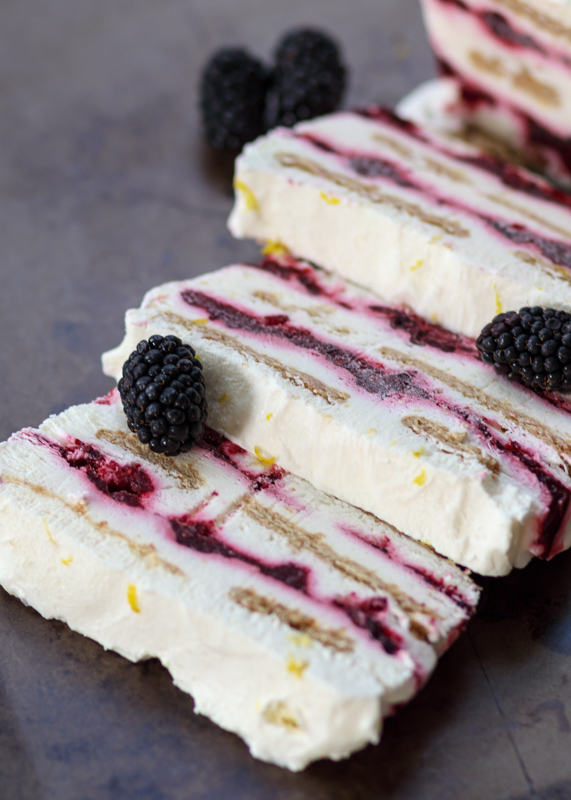